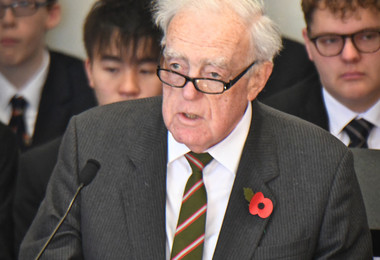 It was our great honour to welcome former Headmaster Steve Benson (82-97) to deliver the address at our unique OS Service of Remembrance.

Old Stortfordians, Staff and College families gathered in a Service of Remembrance to honour those that have been lost in conflict since WW1. We were privileged to host the special Service on Armistice Day to mark the Centenary Anniversary of the end of World War One and as part of our 150th Anniversary celebrations.

We were greatly privileged to warmly welcome descendants of OS commemorated on our Roll of honour to the Service. These included the Great Niece of the 3 OS Stephenson Brothers lost in WW1, at the ages of just 19, 23 and 33. The Stephenson family had great ties to the College with all 9 sons attending and their Father, a Governor of the School after WW1, laying the foundation stone for the Memorial Hall itself.  Richard Joscelyne (SHb 60-66) read part of the Roll of Honour including the dedication to his Grandfather, Clement Percy Joscelyne (DBH, 1895-01) and Mrs Carole Paternoster, Daughter & Niece of George (DBH, 28-37) & Tomas Ecclestone (DBH, 33-39) both lost in WW2 who joined OS President Kate Coysten (YH, 91-93) in the laying of wreaths.

Mr Benson spoke emotively about the human toll that the First World War took on the nation through the loss and injury of so many, often very young, men. A loss that lay especially heavily within Independent Schools who lost 20% of their former pupils, many Officers who often led assaults from the front and bore the brunt of enemy fire. He went on to reiterate the importance today of the words spoken by Sir Arthur Quiller-Coach as he opened the Memorial Hall in 1923: that men who had gone through the horrors and dangers of war were already beginning to forget it: so be it. But it was not for those who were too old or too young to share the experience to forget it; it was for such to look at the war clearly, face to face, and estimate their sacrifice. ‘We must always think of these our elder brothers as ever dwelling in this place’.

We will remember them…

This year we celebrate the foundation of the College 150 years ago but we are here today to commemorate a much more sombre anniversary. On this day 100 years ago the Great War ended. In London and in cities, towns and villages throughout Great Britain there were scenes of rejoicing as the crowds large and small turned out to greet the Armistice. But for many, such celebrations were muted. Over 700,000 British Soldiers, Sailors and Airmen died in battle, of wounds, or disease. Nearly 2,000,000 were wounded or shattered in mind as well as body.

11% of all who served in the British Army were killed. Nearly 20% of all boys from Public Schools made the supreme sacrifice. The discrepancy is not hard to deduce. The vast majority of this latter group became officers and they were the men who led the attacks against the shells and machine guns in the trenches and in No-mans’ Land. They marched in front, armed with revolvers rather than rifles and dressed in different uniforms. Better diet made them on average five inches taller too. They were the obvious targets for snipers and they were the first ones to the wire and, if still standing, into the enemy lines. 40% of officers who fell were from the lowest commissioned rank, second lieutenant, and most if these were aged between 18 and 21.

When the War was over there was a wave of demand for memorials: market crosses carved with the names of the dead, larger and grander edifices such as Lutyens’ Cenotaph in Whitehall leading the parade. The Public Schools were not to be denied and chapels, halls and other buildings bore witness to the general desire to honour their own fallen.

Designed by Clough Williams Ellis, The Memorial Hall was opened in 1922 by one of the great literary giants of the age, Sir Arthur Quiller-Couch. ‘Q’ had lost his only son on the Western Front and his words thus carried extra meaning. ‘It is not for those who are too old or too young to have gone through the horrors and dangers of war to forget it but to look at war clearly, face to face, and estimate the sacrifice’. ‘We must always think’, he concluded, ‘of these our elder brothers as ever dwelling in this place’.

Much has been written, in prose and poetry, of the horror, the bitterness, the terror, the anger and also of the comradeship, the humour and the courage of those who fought. But perhaps Wilfred Owen found the most appropriate word when he spoke of the pity of war. Pity for the men who died and also for the wives who lost husbands, siblings their brothers, children their fathers, parents their sons and for them the pain went on.

I’d like to read a short section from A Shropshire Lad by A E Houseman. Published in 1896 it sold slowly at first but the Boer War and later the Great War made it hugely popular and thousands of copies accompanied officers and men to the trenches. I should like to dedicate this reading to the men and boys, of Stortford in particular, whose names are carved at the entrance to this hall.

The Lads in their Hundreds

THE LADS in their hundreds to Ludlow come in for the fair,

There’s men from the barn and the forge and the mill and the fold,

And there with the rest are the lads that will never be old.

There’s chaps from the town and the field and the till and the cart,

And many to count are the stalwart, and many the brave,

And few that will carry their looks or their truth to the grave.

I wish one could know them, I wish there were tokens to tell

The fortunate fellows that now you can never discern;

And watch them depart on the way that they will not return.

But now you may stare as you like and there’s nothing to scan;

And brushing your elbow unguessed-at and not to be told

They carry back bright to the coiner the mintage of man,

The lads that will die in their glory and never be old.

One more poem, it was written by a spitfire pilot and an ex public school boy who died in a mid-air collision in 1941 during his tenth week on active service. He was 19 years old. His poem expresses the exuberance, exhilaration and adventurousness of youth which should be celebrated even as we remember with pity ad overarching sadness their final sacrifice.

Oh! I have slipped the surly bonds of Earth
And danced the skies on laughter-silvered wings;
Sunward I’ve climbed, and joined the tumbling mirth
Of sun-split clouds, — and done a hundred things
You have not dreamed of — wheeled and soared and swung
High in the sunlit silence. Hov’ring there,
I’ve chased the shouting wind along, and flung
My eager craft through footless halls of air . . .

Up, up the long, delirious burning blue
I’ve topped the wind-swept heights with easy grace
Where never lark, or ever eagle flew —
And, while with silent, lifting mind I’ve trod
The high untrespassed sanctity of space,
Put out my hand, and touched the face of God.