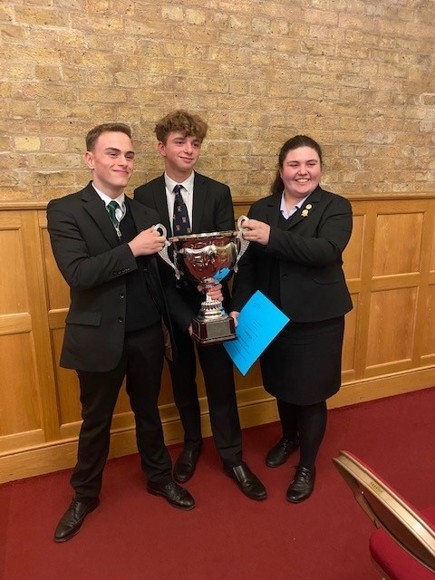 Here is a write-up of the event from one of the team members, Scarlett:

"Last night, James Gilbert, Ed Hart, and I, Scarlett Kedadi, performed in the Rotary Youth Speaks competition. After weeks of rehearsals with Miss Speight and careful planning, the time was finally here to perform in front of a live audience.

We faced off against Boys High and Herts & Essex and were chosen to speak 3rd. The other teams spoke about: is the death penalty moral, why the world revolves around straight men, and is youth speaks dead. These topics were all thought provoking and compelling, and were hard competition for our speech on takeaways.

Competing in this Youth Speaks competition was an extremely valuable experience for the team as it gave us the chance to test our public oration in a local competition against other schools, rather than just within our college community. This performance was particularly important as it was the first one with James Gilbert, who performed faultlessly with natural ease and intelligence. As he was a last-minute addition, James stunned everyone when he executed his speech perfectly. After the main speech, a member of the audience asked a challenging question that even the audience members were baffled by! It was astounding to watch as he handled an extremely difficult situation with such humour, masterfully entertaining the audience while gaining Ed some time to deliberate an acceptable answer. Our main speaker, Ed Hart, performed with his usual charm and charisma and dazzled the judges with his informative and well-researched speech.

Overall, the evening was a complete success, and we were lucky enough to have won first place. Thanks so much to all those who supported and to Miss Speight for helping us succeed!"

Congratulations to the team on this fantastic achievement!