Bishop's Stortford College was founded in 1868 by a group of prominent Nonconformists (that is those belonging to protestant churches independent of the Church of England) in East Anglia who wanted to establish a public school "in which Evangelical Nonconformists might secure for their boys, an effective and Christian education on terms that should not be beyond the reach of the middle class generally".

However, two grammar schools in the town proved confusing, so in 1901 the name was changed to the Bishop’s Stortford College and instead, the group became a board of governors with nominees from the Baptist, Congregational and Presbyterian churches on the panel.

From the start, the Nonconformists worked to break down barriers between people and to respect individual conscience. This was reflected in the combination of boarding and day pupils and in a determination to play a role in the local community.

The school’s first headmaster was the Reverend Richard Alliott and its first pupils were 40 in number. Rev Alliott led the school for 31 years and his successor Francis Young was also in post for 31 years. It is notable that the school only had five headmasters during its first one hundred years:

The school built a strong reputation for sport and was one of the first schools in the country to have its own indoor heated pool, built in 1895.  Under the headmastership of F.S. Young, the school continued to grow in both size and reputation. Young commissioned many of the red brick school buildings designed in the arts and crafts style by architect and former pupil Herbert Ibberson, acquired the sports fields which occupy 100 acres of land and, in 1902, took over an existing school for boys aged 7 to 13 years. The life of the Bishop's Stortford College Prep School began with just 8 day pupils and 8 boarders.

The Memorial Hall, Bishop's Stortford College’s most distinctive building, was designed in Georgian Colonial style by architect Clough Williams-Ellis who was known chiefly as creator of the Italianate village of Portmeirion in North Wales. The Memorial Hall was erected in 1922 to commemorate the 62 pupils who had lost their lives in the First World War. A second Roll of Honour was added in 1949, inscribed with the names of a further 154 former students who lost their lives in World War II.

In 1968 the school celebrated its centenary with a visit from the Queen Mother and in 1978 the first girls were admitted into the Sixth Form. The transition to full co-education throughout the school began in 1995 coinciding with the opening of a new Pre-Prep for girls and boys aged 4 to 7 years.

Bishop’s Stortford College’s reputation for providing an outstanding education in the fullest sense of the word has continued to grow. Today, it is one of the leading co-educational, all through, day and boarding schools in the country.

The History of Bishop's Stortford College 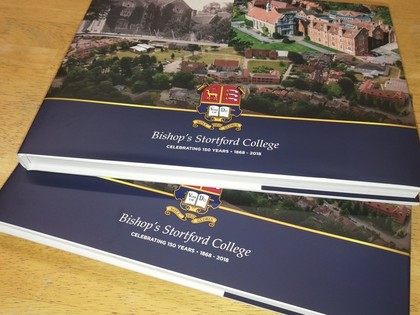 The History of Bishop's Stortford College is a 196-page hard backed book, featuring photos and the history of the College since its beginnings in 1868. To buy a limited edition copy for £34.50, please click the link here.  Please note, this volume is heavy and so if you wish the book to be mailed to you, there will be an additional postage and packaging charge of £6.50 (UK mainland), £11 (EU) and £17.65 (rest of the world).

"We remember with respect, therefore, those who founded this College and those who, over the years, have built upon that foundation. And they built upon it not for personal gain. This has never been a business for profit. They built upon it out of a sense of idealism and commitment to education and to the society in which they live."