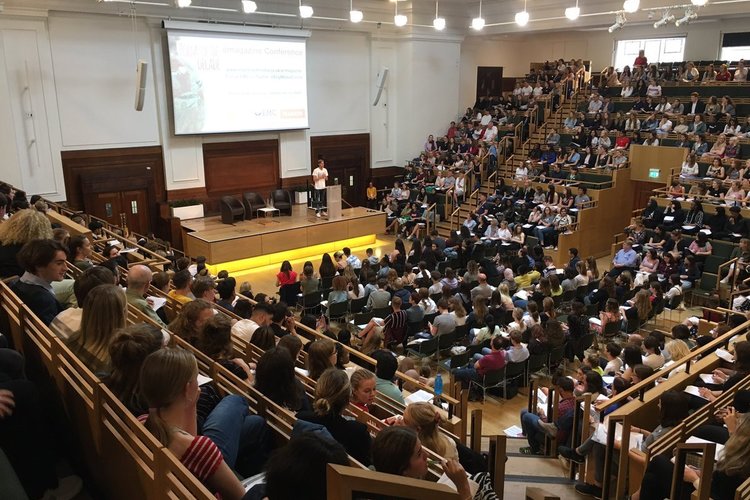 On Monday 24th of June, Lower 6th English students attended the ‘Poems of the Decades’ conference at Friend’s House in Euston, London, as part of their studies of English A level poetry.  As the poets gave lectures followed by Q&A sessions, the conference provided a unique opportunity for the students to challenge the poets of poems they are currently studying. Poets such as Ross Barber, Alan Jenkins, Daljit Nagra and Patience Agbabi were all present and provided some thought-provoking analysis of their own work.

The morning began with a surprise analysis of an unseen poem from Michael Rosen, author of the classic: ‘We’re going on a Bear Hunt’. Lower Sixth English student Harry B was at the conference and commented that this "was something we all treasured as he provided some interesting interpretations of how to tackle the unseen section of the exam, alongside some well-placed jokes". However, the real heart of the day began with Alan Jenkins and Ross Barber, joined by critic Sarah Crown, as they compared and contrasted their poems about the loss of their mothers. Harry commented, "It was interesting to see that their ideas were very similar as they both recounted that they used the poems as a coping mechanism to deal with the symptoms of grief that they experienced. Their discussion of form was particularly interesting as, despite the poems being largely different in this sense, they used their respective forms in order to portray a parallel message. A great example of the open ended and versatile nature of the poems that we studied."

Before lunch, the poetry critic, Sarah Crown returned to tackle the poem, ‘History’, by John Burnside and then compared it with a poem that she had only read ten minutes prior to her presentation. Harry said: "This was particularly useful as, not only did this expand our notes and knowledge on ‘History’, but we were able to see the thought process of a professional as she was placed into the same situation that we will be in in the exam next year. I’m sure that many of us picked up a few tips for tackling this challenging part of the A Level exam."

The eagerly anticipated Daljit Nagra discussed his poem on immigration, ‘Look We Have Coming to Dover!’, focusing heavily on the immigration problem of today with many strong views being expressed. Patience Agbabi then took to the stage to discuss her divisive poem, ‘Eat Me’. Her feminist views were prominent as she gave a passionate reading of what is a very powerful poem about female empowerment.  Finally came the highly anticipated performance by the Slam Poetry World Cup winner Harry Baker, who recited three of his award-winning poems interspersed with some hilarious stories of his travels. Harry commented, "His poems, ‘Paper People’, ’59’ and ‘Maybe’ all connected with me personally and I’m sure everyone appreciated their light-hearted approach to subjects such as self-love and relationships. Being a maths graduate, Harry is a perfect example of the versatility that many people may discover in themselves whilst, also showing the subtle links between Maths and English that people may not notice. A true pleasure to watch."

This was clearly a very insightful and enjoyable experience for Lower 6h English students, which will prove useful in their studies.