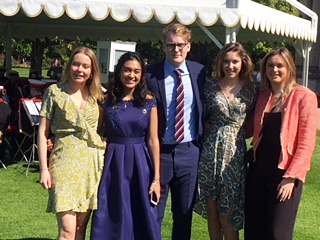 On Monday 13th May eight Old Stortfordians received their Gold Duke of Edinburgh's Awards from the actor Jake Wood in the grounds of Buckingham Palace. Prior to this they met with Prince Edward who chatted with them about their experiences on the expeditions and other sections of the award.

This group of pupils had done some amazing things for the Residential section of the Award. Traditionally this can be quite a challenge for the pupils to find something exciting which is allowed by the rules. Out of this group four of them went to Malawi to volunteer with the charity Inspire Malawi, another went to work in an elephant sanctuary and another took part in a language course in Europe as well as other participating in a cookery course. They all returned eager to speak of their experiences a, having learned a lot in a short time.