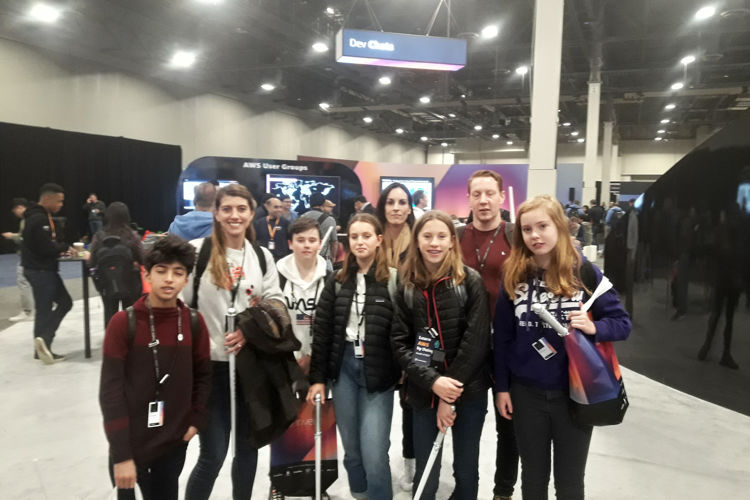 As part of their prize for winning the AWS Get IT Competition when they were in the Upper Third, the Connect Hearo team of pupils, Ibby W, Zak E, Charlie G, Amy P and Millie  A who are now in the Fourth Form, were invited to Las Vegas to attend the Amazon Web Services (AWS) re:Invent summit during the first week of December. This annual event is one of the biggest tech conferences in the world and had an estimated 65,000 attendees this year!

On the first day of the trip, the team were not only interviewed by the AWS team for the summit blog but also by leading tech magazine Computer Weekly. Caroline, the journalist from Computer Weekly, wanted to know all about how the team had come up with the idea for the Connect Hearo app and the progress they had made so far with its development. She also briefed the team on a special assignment to contribute to the magazine’s coverage of the summit. You can read the final article here. The team also managed to squeeze in some sightseeing by taking in the view of ‘The Strip’, visiting some of the world-renowned hotels such as Paris – Las Vegas, The Venetian and The Bellagio with its famous dancing fountains. And of course, no trip to Las Vegas would be complete without visiting Hershey’s Chocolate World!

The second day kicked off with the team meeting with Rob Smedley who spoke about his experiences working with Maclaren and Ferrari, and how he has become a leading Formula One engineer. Zak and Charlie had lots of questions for Rob but unfortunately the team only had 15 minutes with him before embarking on their AWS ‘Field Trip’. During this part of the summit, the team took part in a half day workshop to learn more about cloud technologies with a local high school. They were introduced to the AWS Educate platform and artificial intelligence (AI) before turning their knowledge into practice by creating their own Chabot using Amazon Lex. This was followed by an inspirational talk by the CTO of the Jet Propulsion Lab (JPL) for NASA, Tom Soderstron. Tom spoke to the pupils about the Mars Rover project and facilitated a brainstorm amongst the group to identify alternative ways the technology could be used on Earth. Lastly the team were given a guided tour around the summit’s Expo Hall visiting lots of different booths which showcased new and exciting technologies. The pupils were able to try out some Virtual Reality (VR), Augmented Reality (AR) and AI whilst talking to the developers who are involved in the projects.

The team concluded their whistle-stop tour of Las Vegas that evening with a trip on the world’s tallest observation wheel, the High Roller. It may have been a short visit but hopefully the team came home with memories that will last a lifetime – and an aspiration to find out more about a career in tech.

During their trip to the Summit they were interviewed by Computer Weekly - read the article here. 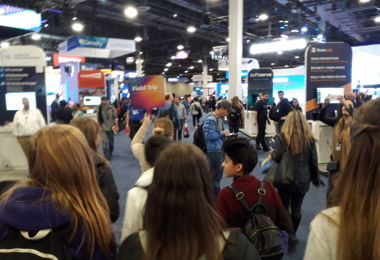 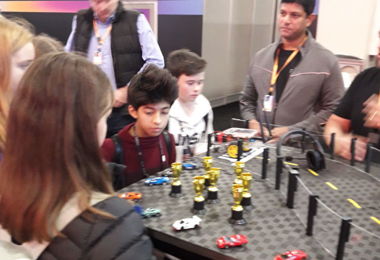 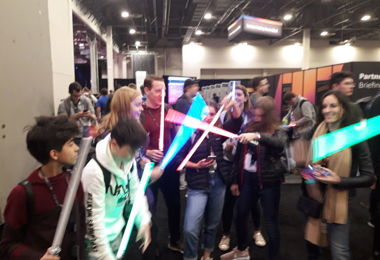 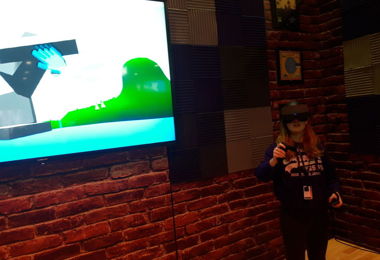 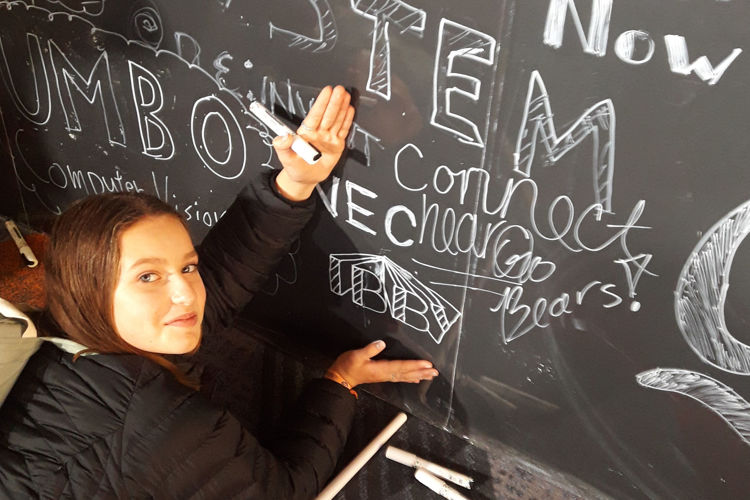 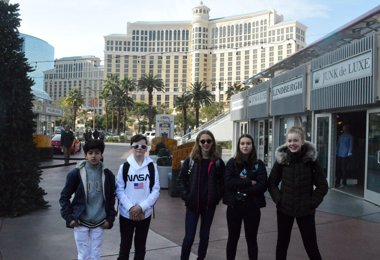 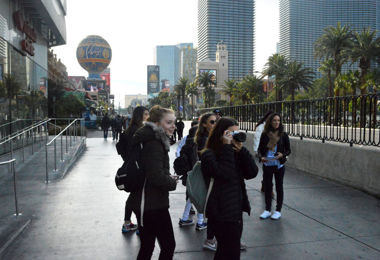 The team had entered, and won, the Amazon Web Services (AWS) Get | IT competition at the AWS Summit in London on Wednesday 8th May 2019 with their Connect Hearo app, which assists pupils with hearing impairments in their lessons. The team then worked hard to develop the app, and on Wednesday 13th November, they demonstrated to Senior School teachers how the app will work, asking for volunteers to test the prototype in lessons. Feedback will then be gathered and provided to the AWS Development Team to inform the next round of development.

The original competition brief, launched in the Autumn Term of 2018 when the pupils were in the Upper Third, was to develop an app to help solve a real-life problem in their school or local community. 130 schools took part in the Get | IT competition, which was launched by AWS to fill the digital skills gap in the UK, improve communication and inspire young people, (particularly girls) to consider a career in technology. 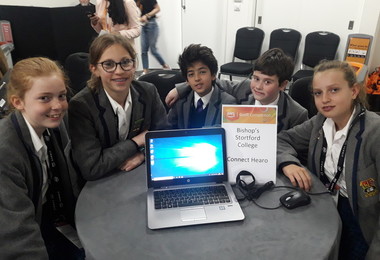 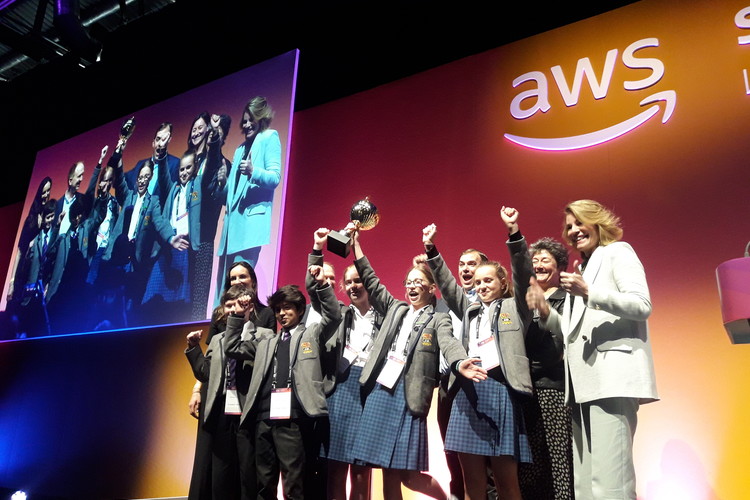 Following a bootcamp at the London offices of AWS in December, the team returned to develop their ideas and their presentation, which was formally submitted to the competition at the end of March. Just a couple of weeks later, the team heard their idea was one of the final 10 to go through to the annual AWS Summit.

At the Summit, the teams were split into two groups of five, with each team presenting their ideas to their group panel. Each panel then selected one team to go through to the Grand Final. The day was both exciting, tense and challenging but the final test was the Grand Final for which the Prep School team was incredibly proud to have been selected.

Presenting in a 1200 seat theatre, whose occupants included the other school team finalists and members of the ‘tech community’, the team explained how their app, ‘Connect Hearo’ could help to solve the problems of up to 45,000 moderately to severely deaf school children in the UK through the use of speech to text technology. The Grand Final judging panel included top tech personnel from AWS, Cancer Research UK, the Ministry of Justice and Deloitte.  The app will now be developed and marketed by AWS.

Wendy Sharman, Prep School Director of Studies commented, “This has been an interesting and exciting challenge for the children. They have had to identify a problem and think carefully about how they might solve it using technology. They have learned an incredible amount and we are particularly proud of their achievements. We look forward to seeing the app available to those who will benefit.”