U16 Girls are County Champions 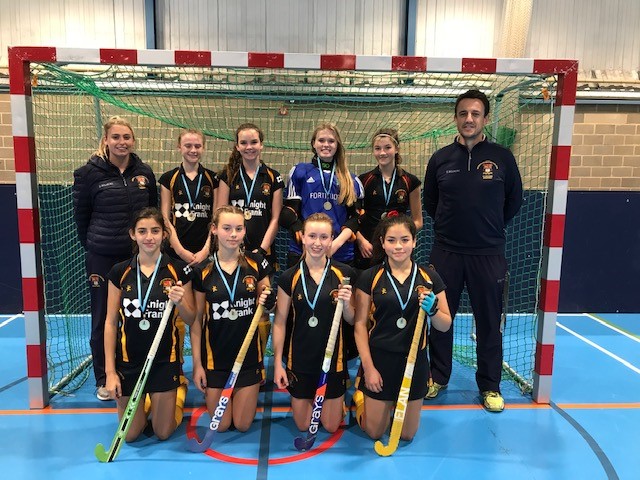 The U16 girls produced some scintillating indoor hockey to be crowned county champions on Thursday 8th November at the indoor tournament held at Aldenham School. The tournament was a round robin event and the team played against Queenswood, Aldenham and Haileybury.

The first match was arguably the toughest assignment against Queenswood and with only one team progressing to the East Finals in December a win for either team would go a long way in securing passage into the East Tournament. The game started at a frenetic pace and the College team dominated the opening exchanges. Unfortunately a defensive error led to a breakaway from Queenswood’s star player and she duly finished pass Lizzy Tupman in goal. The College remained composed and continued to play some excellent indoor hockey laying siege to the Queenswood goal. Unfortunately the Queenswood goalkeeper was having a ‘blinder’ between the posts and some slack finishing meant the half ended 1-0 to Queenswood. After a positive half time team talk where we spoke about keeping calm and the goals will come the second half continued in the same manner with the College dominating but no goals to show for their dominance. With 3 minutes remaining we subbed our GK to play with 6 outfield players and it paid dividends with Imogen Swann equalising with 30 seconds to play. We strived for a winner but to no avail and the match finished 1-1. This meant that goal difference was probably going to decide the winner and runners up.

Aldenham were next and whilst we continued to play some excellent hockey the goals were more difficult to come by. We had scored 3 by half time but crucially conceded a goal after the umpire had missed a foot in the build-up which caused us to stop playing (always play to the whistle!). We found the net 3 more times in the second half but missed some guilt-edge chances and we were left thinking would we regret that?

In the meantime Queenswood had beaten Haileybury 1-0 but more importantly for us beaten Aldenahm 10-0! This meant we not only had to beat Haileybury but do so by the margin of 6 goals. A no mean feat considering they had been more than a match for Queenswood.

Not only did we beat Haileybury we thrashed them 8-0! Sometimes games of hockey just click and luckily for us this was that one occasion where we not only dominated the match we scored some sublime goals in the process. Every player gave their all and to not concede a short corner throughout the tournament was testament to the outstanding defensive display from the whole team.

We look forward to representing Hertfordshire at the U16 East Round in December and, with continued hard work and practice with Mr Prowse and Miss Francis (Senior Welsh Indoor International) we have every chance of emulating the county success at the Easts and qualify for the National Finals in the New Year.