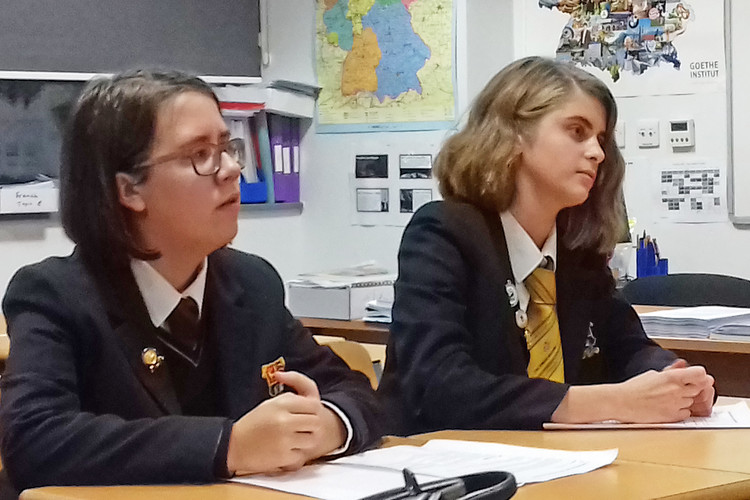 Congratulations to our Upper Fifth Germanists who were victorious, for the second year running, at the inter-school German Debating competition held at the Perse School on Monday 12th November.

On Monday, Upper 5th pupils Izzy and Elizabeth, German Assistant Sophia and Frau Gregory went to the Perse Upper School in Cambridge to compete against schools including Bancroft, the Leys and the Perse in the annual Year 11 German Debating competition.  Izzy and Elizabeth have written the following account:

It had been an intense week of preparations as we composed for and against arguments for topics such as “Should phones be forbidden in schools?”, “Are celebrities good role models for young people?” and “Does social media make us lonely?”, but we were more than ready for the challenges that lay ahead. Our first rounds were against Bancroft and we thoroughly enjoyed debating against their lively and dynamic teams and were quite pleased to emerge from the first rounds unbeaten with 10/10 points. These first debates had dispelled any nerves and we were excited to go into the final against The Perse team, who were intelligent, passionate and determined to put us to the test. However, we stuck to our guns and remained unperturbed as a fierce debate was enjoyed by all. Eventually the judges reached a verdict and it was announced that we were the victors! It was a lovely evening and gave us the chance to meet and compete against other young Germanists and gain invaluable confidence!

Thank you to Sophia and Frau Gregory for all your help!

Izzy and Elizabeth, U5