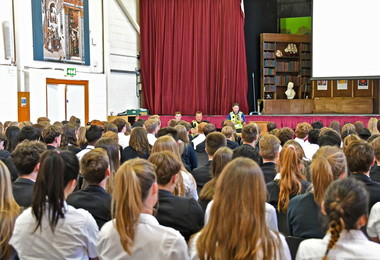 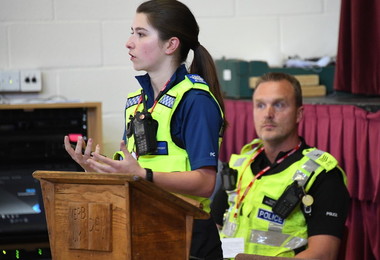 On Monday 25th June PC Tea Prow came to the College to talk to the entire 4th Form and Lower 5th about the issue of drugs from the perspective of the police.  The talk was designed to show the pupils that the College and the police work closely together in the fight against drugs because they are illegal and dangerous. It also aimed to help educate them about the dangers of drugs and the link between drugs and knife crime, as well as some of the consequences of getting in trouble with the police, including how it can affect future plans to visit countries like the USA.

During the talk, PC Prow explained the many reasons why under 16s get involved with drugs, including boredom, peer pressure and the need to take risks.  She mentioned how scientists had created a famous experiment using rats, in order to demonstrate the importance of boredom in taking drugs.  In one group, the scientists kept a group of rats isolated and bored and with a choice of plain water or drug filled water.  In another group, rats were allowed to socialise and were given wheels and obstacles to occupy them.  In the first group the rats opted to drink the drug filled water rather than plain water, simply as something to do and to give them a boost.  In the second case, because the rats were happy and stimulated, they ignored the drug filled water and drank the plain water instead. 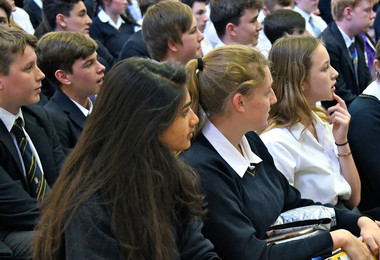 Afterwards PC Prow explained the different classes of drugs, why some people take each class and the negative effects each one has on human beings. She also outlined how the UK judicial system might sentence those who partake in different class drugs.  She talked about the growth of electronic cigarettes (vaping), explaining that it is illegal to sell vape equipment to under 18s, and warned the pupils that the THC oil for vape pens is not only illegal but very strong indeed.  She finished by illustrating some of the links with knife crime and showed the pupils a brief true story about the dangers of drugs.

At the end I told the pupils about a short but very engaging and informative documentary about the perils of experimenting with drugs called ‘A night of ecstasy’.  The series of 5 minute YouTube clips is a true story and follows a group of friends as they head to a festival and take drugs, with life-changing consequences.  The key question for me, which the programme did not really answer, is why, if they were such great friends and having such a good time drinking beer and partying, did they feel the need to take drugs, with all the risks this entails?  It is an important question for the pupils to ponder.

As usual, the pupils were excellent as they listened to this outside speaker and many were able to give good answers to PC Prow’s questions.  Whilst in many cases  I am sure they have already heard much of the information before, I do hope they go away and, if in the future they are offered drugs, that they will have the confidence to just say no!