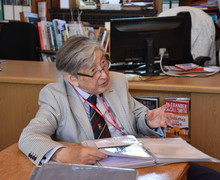 It has been a great honour and a privilege to welcome back OS Professor Otto Hutter (SHb 39-42) and his Daughter, Son and Daughter in Law to the College this week.

Professor OS Otto Hutter (SHb, 39-42) was evacuated from Vienna in 1938 as part of the first Kindertransport movement ahead of the start of World War Two, he was in fact the 359th of 360 children to successfully register for that initial evacuation. At the age of 14 he could have been put to work on arrival in England but at the encouragement of his Lawyer Father before he left home, Otto pursued to continue his education in the UK. He achieved this through the very generous sponsorship of a small group of OS who funded his education at the College themselves, this was to prove to be the beginnings of the OS Benevolent Fund. Otto thrived academically at the College and spent the school holidays at the family home of one of his OS sponsors, Alec Blaxhill (SHa 1913-17). When Otto left the College he undertook essential war effort activities within pharmaceuticals, working on the development of the provision of insulin and the first batches of penicillin. After the War and the completion of a degree at UCL Otto went on to have an eminent career within the field of Physiology, eventually becoming an Emeritus Professor at the University of Glasgow. 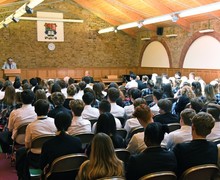 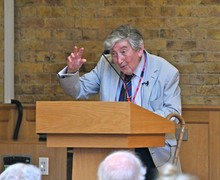 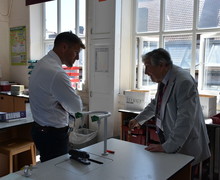 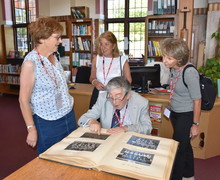 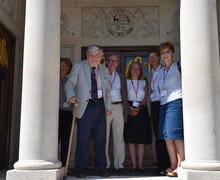 During his visit Otto enjoyed a brief tour of the Senior School and was thrilled to be able to visit a chemistry lab and spend time reflecting in the library. Much to our delight Otto spoke of his time at the College and his career beyond to our L6th Pupils and was joined at his request by much respected historian and fellow OS Professor Derek Beales (RPH, 42-49) and OS Committee member Michael Baim (SHb, 58-62) who has struck up quite a friendship with Otto in recent months. Otto spoke eloquently and animatedly about life at the College during the war. He spoke of his delight in spending time in the science laboratories, cold baths in School House and his talents not on the cricket field itself but in the scoring chair. Sheltering under the School House dining table became a regular occurrence during air raids and fire drill evacuations down a fabric tube from the upper School House dorms was firmly fixed in his memory. He spoke with affection and gratitude for being given the opportunity to thrive within the School.

To conclude his visit and to mark the 80th (Oak) Anniversary of the Kindertransport evacuation and his arrival at the College, Otto planted an Oak tree on the edge of Middle Green which he very generously donated to the College. The tree will be visible to every visitor and member of the College community on a daily basis and will serve as a humble reminder to us all of the fact that success and happiness can be borne out of the most horrific adversity. 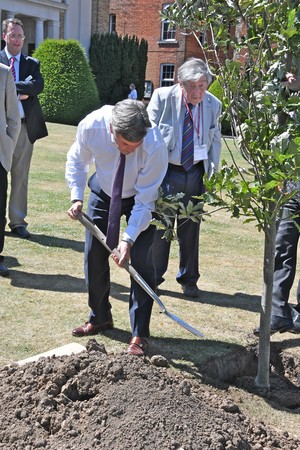 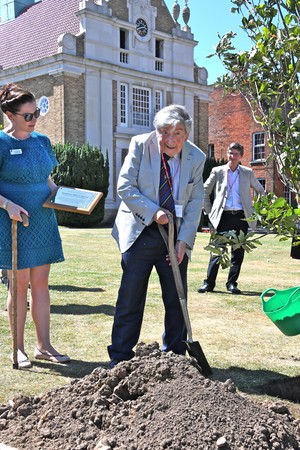 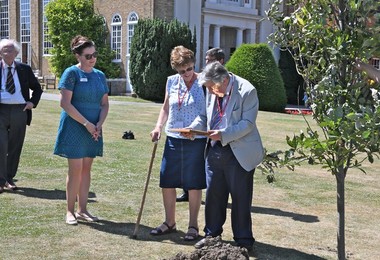 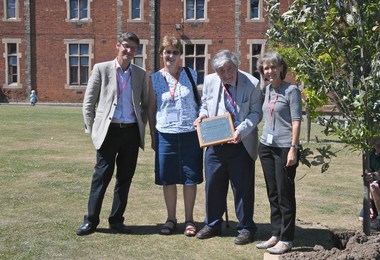 Sadly Otto lost his Parents during WW2 but his Sister was lucky enough to arrive in the UK and work within domestic service, quite coincidently near to Bishop’s Stortford.  Otto and his Wife Yvonne live in Bournemouth and will celebrate their 70th Wedding Anniversary over the summer. They have a large family living around the world and they couldn’t be prouder Parents, Grandparents and Great-Grandparents, an amazing legacy for a young Jewish boy evacuated from a Vienna on the brink of World War.

Otto is forever grateful to the small group of Old Stortfordians who facilitated and funded his College education. He concluded his talk by reciting the key message in the 1938 fundraising appeal letter which gives all members of the College Community something to reflect on from this day onwards as we consider our individual and collaborative roles within such a vibrant and supportive community.

‘From one country after another in Europe, today men and women, who have been guilty of no offence, are being driven out as penniless refugees. To their distress none of us can be indifferent, but few of us can, out of our own resources, offer any effective assistance. What, then, can Stortford do?’ 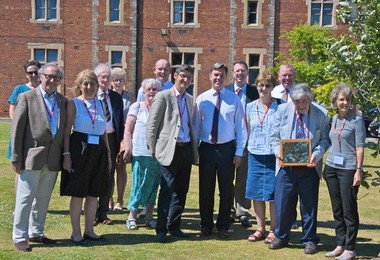 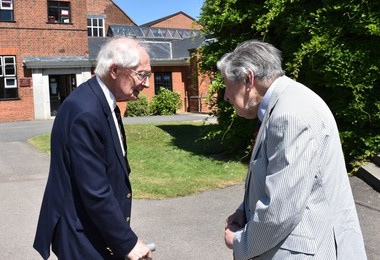 We will be forever grateful to Professor Hutter for joining us on campus to share his College memories first hand with the next generation of Stortfordians and for his generous donation of the beautiful oak tree. His visit is one that will live on in our memories for many years to come.