U16 Boys are Joint 3rd in Indoor Hockey Nationals 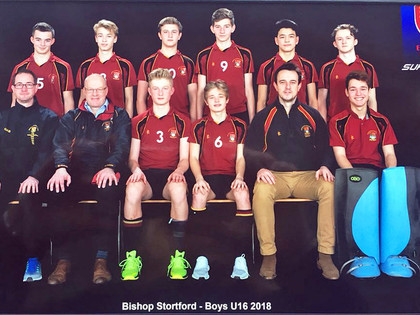 What an odyssey this year's assault on the 2018 National Indoor Finals proved to be. By mutual agreement training started in June, outdoors, and this soon became Friday evenings indoors in September.   We safely navigated our way through a tricky Herts County Finals in October, to enjoy five excellent games in Hamburg in December, finishing Runners-Up in the East Finals on January 7th 2018.  The sheer variety of experiences would mean that this group of boys would go into the National Finals with a quiet confidence and, rightly, a sense of expectation.

In the first match against Lingfield, the boys played well and dominated the whole match for long periods. However, despite goal mouth scrambles and a well taken short corner by Dan E with 1 minute to go, we were still (unbelievably) only 1-0 up. Back came Lingfield, for what amounted to only their second real attack of the game and, with the clock ticking, won a short corner, which they duly converted.  To say the atmosphere in the changing room afterwards was funereal would be an understatement, as all the boys knew they had let slip what should have been a 5-0 lead, with all the possession and territory we had had. 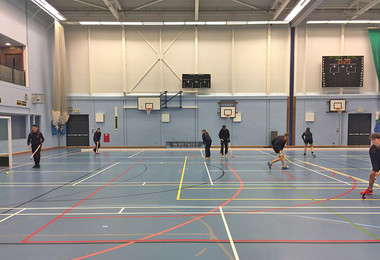 Our second match was against the much fancied Repton side, coached by their England U21 coach.  Both teams played a patient, well structured game and early honours were even.  Then Repton went 1-0 up only for Dan E to fire home once again from a short corner. Back came Repton and in a mad two minutes we conceded two more from cheap short corners.  In the second half honours were even as both sides missed several chances, although they did manage to add to their tally and we finished 1-4, with no complaints.  The atmosphere in the changing room this time was very different, we knew that in that game they had found their rhythm better than we had and were deservedly the winners.

In the final 'must win' game of the day we played the West winners, Millfield, and once again Dan E was on fire as we quickly and patiently started to build a lead.  Aggressive but skilful defending from Ben B, Tom S and Joe P nullified their attacks and some excellent interplay between Josh B, Henry M,  Dan E and James M saw us snaffle several quick goals.  In the end, despite Millfield taking off their keeper, as they threw everything at us in an attempt to claw back our lead, we finished with a well-deserved 4-1 victory.  The win placed us 2= in the group and left Saturday all to play for.  The players and coaches endured the 25 minute ride to their hotel and after a shower and a lovely supper, fell asleep dreaming of what could be the next day.

In our final pool game we had the luxury of knowing that all we needed to do was win the last game, thanks to Millfield’s beating of Lingfield in the match before us. However, the match started poorly as we elected initially to play on the counter attack, feeling confident that we had the defensive skills to soak up any pressure from their attackers.  In quick succession Egglescliffe scored a series of soft goals and despite our superior skills and structure we found ourselves 3-1 down with 9 minutes to play. High up on the balcony the College ‘barmy army’ fell silent as we looked about to fail at the final hurdle. 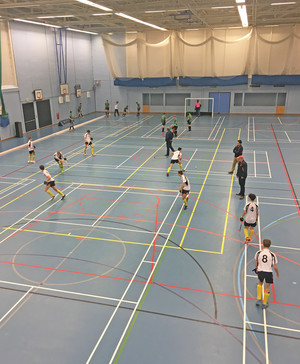 But they need not have worried, because this group of boys are a resilient lot and never ever believed it was over.  A stirring fightback had begun.  The switch to a much more aggressive play immediately bore fruit as Ben B, Josh B and Dan E combined to score two quick goals.  It was now 3-3 with under two minutes to play and the College needing to win.  Back came Dan E again to win a short corner and with the seconds ticking away ‘the moment’ had come.  The boys later admitted that as they stood over the short corner, knowing it was likely to be their last opportunity, time seemed to stand still.  It is at these moments that all the training late on a Friday evening or in the holidays, pays off as the boys simply fell into a much-practised routine.  Ben B duly made the call for ‘Alster’, named in honour of our hosts in Hamburg (who so liked our routine that they copied it - high praise indeed when you consider they are the world’s best indoor players: NB one of the reasons schools like Worksop, Oakham and Dean Close have so many players at their schools with suspiciously German sounding names like Wolfgang!). With legs trembling,  Dan E injected the ball to Ben B, who placed an inch perfect pass back to Dan E, who duly placed it in the roof of the goal.  With the net still billowing from the violent passage of the ball, the players turned and with looks of sheer ecstasy and delight raced back to see the final few seconds ticking off the clock.  They had done it - they had got through to the semi finals.

In our semi-final against the tournament favourites, Whitgift, we knew we would have to play to the limit to overcome a team containing several England U16s.  With the galleries above packed with hundreds of supporters we took to the pitch, quietly determined to do the College proud.  Opening exchanges were cagey but after 7 or so minutes scores were still 0-0 and the boys were moving well, and inter-linking nicely. Whitgift were on top but so far we had contained them.  Eventually however, the pressure started to tell and they won several short corners (some of which we felt were rather dubious, and certainly similar actions the other end we were not rewarded in the same way, we felt).  However, their routine was slick and at half time they were deservedly 3-0, despite us playing well.  In the second half we started to increase the pressure on their back two and some excellent all-round defending made life hard for the Whitgift forwards.  After a superb, mazy solo run Joe P then rounded their keeper and was inches away from the reverse flick into an empty net which would have seen us claw back to 1-4, but his stick rose millimetres over the ball and we were left ruing a gilt-edged opportunity.  In the end we finished 0-4 against a very strong team (who would not concede a goal all tournament!) but our heads were held high and the boys were pleased with the way they had played. 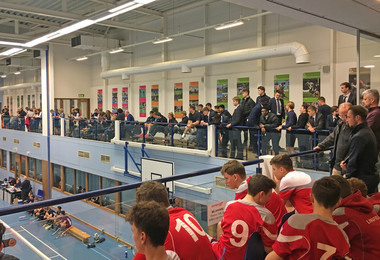 In the end their 3= place at a National Finals equals their outdoor performance in the U14 National Finals of 2016.  Many of the sides contained players we recognised from previous tournaments (plus a few new German players) and it was great to see our boys competing so favourably with these teams, many of whom now contain national and regional players.  This group of boys are a special group; most have been together since Reception and they just never let themselves get down and always respond so positively to adversity.  They are also tightly knit and all of them exist so easily in each other's company, it is a pleasure just observing their strong friendships.  Their interactions are full of good natured teasing and a burst of laughter is never far away, whatever they happen to be doing.  Above all, they are so receptive to being coached and this, and the effervescent, bubbly atmosphere they create, makes them a pleasure to be with and is also a key part of their remarkable success.  Many congratulations to them on all they have achieved, often against much bigger schools, some of whom are almost semi-professional in terms of the scholarships and inducements they offer.

Many thanks to all our loyal supporters who braved the M25 to be with us both days and apologies for taking it right to the wire against Egglescliffe; I am quite sure there are several fingers missing part or most of nails after that roller coaster ride.  Many thanks too to the coaches, Nick and James,  who assisted so ably and helpfully over the weekend, contributing in no small part to our success.

Finally, whilst I am already looking forward to the U18 journey starting in June, there is still the little matter of school and club Outdoor Nationals which begin imminently.