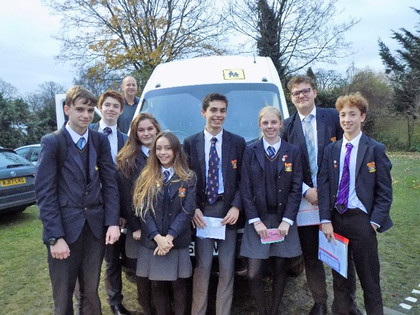 On Wednesday 22 November a group of eight U5 French and German pupils travelled to The Perse school in Cambridge, to take part in our first MFL regional inter-school debating competition. All of our eight pupils had worked tirelessly over the last two weeks to prepare themselves for a vigorous round of debating in French or German against The Perse, The Leys and King’s Ely. The debate was put together so that each pair of pupils had to prepare arguments for and against three different topics. They would not know which topic and which side of the argument they would be debating until one minute before the actual debate took place. The competition was organised by way of knock out rounds which meant that each pair of pupils would potentially have to take part in three debates. The pupils threw themselves into the tasks with determination and motivation and on the night produced some stunning debates and did themselves proud.

During the debate, students discussed topics ranging from the merits of technology, tourism as a blight on society to the idea that school uniform serves no value.The debates were intense and in several cases the discussion became very heated. Students remained focussed and their confidence and calm composure shone through.

The final results saw the Bishop’s Stortford College Germanists comfortably reach the final and both of our German teams had to battle it out against one another for 1st and 2nd place in the overall German debating competition. Not surprisingly they rose to the challenge and conducted themselves magnificently.

Harry and Lizzy, who took part in the French debate, said: 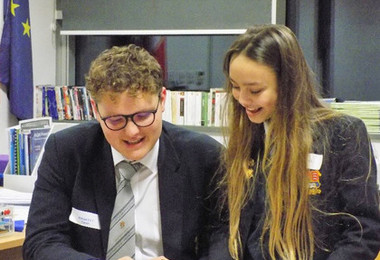 Overall we found the competition very rewarding and we feel that the opportunity for students to be able to put their language skills to good use in a very meaningful and spontaneous manner was invaluable.

Harry and I participated in the Regional Modern Foreign Languages debate at The Perse school. We made up one of two Bishop’s Stortford College French teams and found it to be a highly beneficial experience. As well as expanding our vocabulary in the three debating topics - tourism, social media and the importance of learning a foreign language - we were able to practice our pronunciation and fluency which have been really useful in improving our oral work. This is certainly an experience we will never forget.

Also taking part in the French debate were Josh and Morgan: 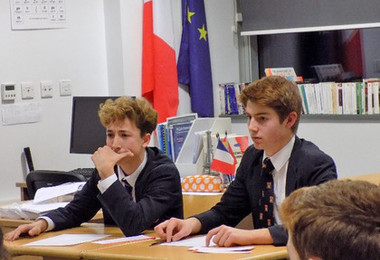 The language debates were great fun but also a fabulous opportunity for us to fine tune our language skills. The new GCSE exam requires us to be spontaneous but also accurate under pressure, so we found this experience really useful. Knowing your partner really well also helps and the feedback from the judges, commented on how effectively we worked together as a team. Although we never won the competition, we conducted ourselves admirably, but more importantly had fun in the process.

Emily and Inez debated in German: 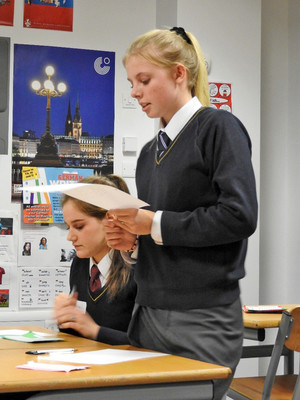 We spent a long time preparing for the debate, writing out arguments, practising phrases and thinking of ways to respond to unprepared questions. During these practices the goal of debating confidently seemed difficult to achieve. When we got to the debate we were both very nervous but after watching the first debate take place some of our fears began to subside. After taking part we realised that it was not nearly as daunting as we thought because we had been so well prepared. Not only did we get through the debates without great embarrassment but we also won overall, something we would not have believed we could achieve if you had told us this three weeks before. Overall it was a very enjoyable experience and we feel it has set us in very good stead for out GCSE German speaking exam.

Luke and Sam were our German debaters: 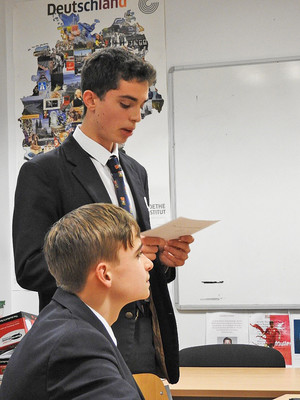 The language debates were an invaluable experience and helped us to greatly develop our fluency and accuracy in spoken German, as well as practising speaking spontaneously. We were lucky enough to reach the final and Inez and Emily narrowly beat us to win. I would very much recommend them for improving your spoken language.