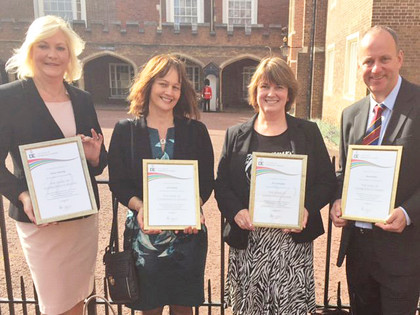 I do find it strange that you wait 12 years for a royal invitation and then two come within six months, for a gold Duke of Edinburgh award ceremony. I had been lucky enough to get an invitation to Buckingham Palace in the summer of 2017, so I felt very privileged and honoured to be invited to St James's Palace a few weeks later. I am sure there are more worthy staff than me.

Arriving to marshal a group of 25 plus students, I was allowed to tour the rooms before the awards. These included The Throne Room, the Picture Gallery and Princes William and Harry’s nursery, which was also the room where the official photographs were taken for the announcement of William and Catherine’s engagement.

After seemly no time at all, we were briefed by the room steward about the order of the day. Soon students and parents along with celebrities started to arrive, the room filled quickly and talks were given about etiquette and procedures, before the royal party arrived.

The operation after that was so sleek that I must admit it was a bit of a blur! A five-minute warning was given and everyone was in place to receive the Earl of Wessex, who was handing out the certificates to the worthy Gold finishers.

With the awards over, I left with the OS students to take photos outside and try to reflect on what a huge privilege we had just experienced.

Well done to Dan P and Douglas R. I look forward to seeing many more OS at the Palace in the future.