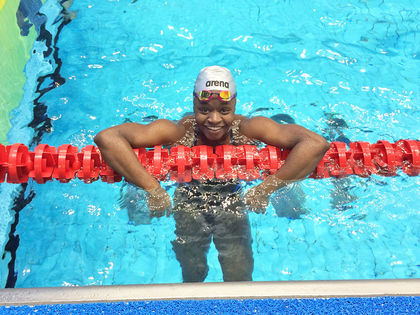 Having just finished her GCSEs you would think Elinah P deserved a bit of a rest. Instead she travelled to Budapest for the World Swimming Championships.

Elinah, who swam in the Rio Olympics in 2016 and won two silver medals at the Carifta Swimming Championships in April, competed in both the 50m Butterfly and 50m Freestyle events against the world’s best senior swimmers.  More used to competing in age group competitions, Elinah described the Championships as “a great learning experience which I thoroughly enjoyed.”

Upon her return to England, Elinah was determined to train even harder for her biggest competition of the season: the World Junior Championships in Indianapolis, Indiana. This time swimming against her peers, Elinah qualified for the Youth Olympic Games 2018 which will be held in Argentina.

The College extend their warmest congratulations to Elinah and wishes her all the best for her future events.