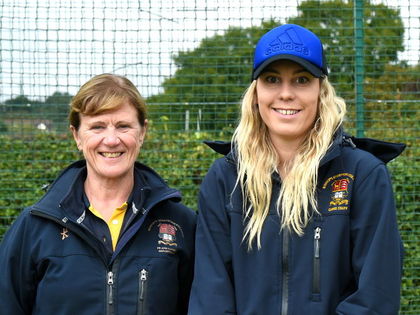 Bishop’s Stortford College are delighted to announce the arrival of Performance Hockey Coach, Kaye Goulding. Kaye has been a professional hockey player and coach for the last 8 years, based in the US and Australia. Kaye has played in the Premier League in the UK and Australia and in Division One in the United States for teams including Doncaster, Longwood and Fremantle and YMCC in Australia.

Her coaching credentials include Premier League Head Coach, Western Australia State Coach and USA Field Hockey Futures Elite. Most recently Kaye was part of the coaching team at The Reds Hockey Club in Australia as Women’s Head Coach and Head of Junior Coaching Development where they won Club of the Year (2016) and had 17 teams in the League Finals. In 2016 the Reds Women’s team, coached by Kaye, won the Premiership.

She brings with her a wealth of talent development experience from these roles and her Australian coaching academy CD22 High Performance which will be establishing a base in Bishop’s Stortford. Kaye was also recently appointed as the National League Head Coach for Chelmsford Hockey Club (one of the closest National League Women's hockey clubs to Bishop's Stortford). Chelmsford Women's 1st team, compete in the England Hockey East Conference League.

Kaye has joined the College with a remit to build on the strong hockey foundations the College already has with a view to achieving national recognition. Kaye commented, “I’m thrilled with the opportunity to work with such committed staff and pupils – it will really make a difference - as we take Hockey at the College to the next stage.”

Director of Sport, Lyndsay Shepherd said, “I am incredibly pleased and excited to have someone of Kaye’s calibre join our team. She has already made a hugely positive impact and I’m confident that she’s the ideal person to help us achieve our ambitions.”