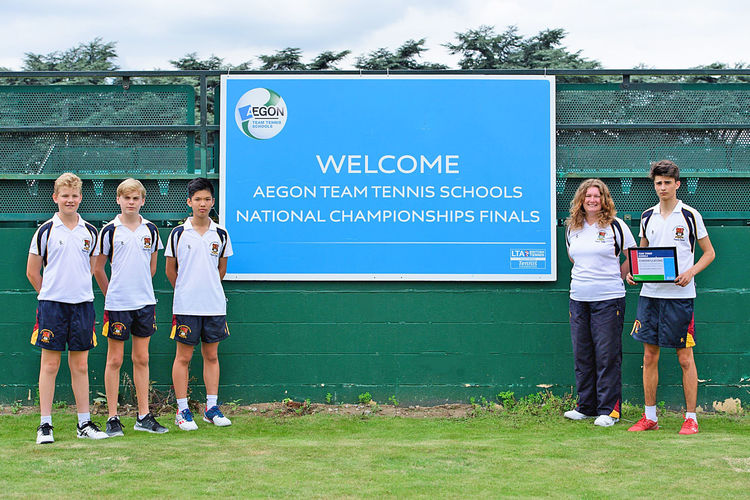 Well done to Tom C, Conrad Y, Aidan M, Fraser M and William D, who all took part in the residential U19 Team Tennis Schools National Championship Finals in Nottingham during the first week of the summer holidays. The boys could not be faulted on their College spirit and determination throughout the week and, despite being the youngest team present, showed experience beyond their ages (13-16), when faced with playing some of the top U19 National Juniors in Britain!

The team were supported by their parents, who visited throughout the week.  A special thank you should go to Mrs Yip, who stayed with the team and myself, adding encouragement and support each day.  There was an excellent team rapport which helped everyone to enjoy the opportunity as well as maximise their skills as the week progressed.  You could clearly see how their games ‘rose’ as the week continued, due to the standard that they were playing against and their ability to positively reflect and learn from the day before.  Despite an intensive week of matches, training and waiting to play, we also found time to take part in the Wednesday night Team Quiz, which provided plenty of entertainment although not necessarily points, as well as friendly rivalry at ten-pin bowling on the Thursday night. 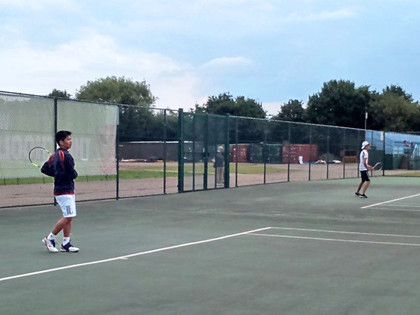 As lucky losers of Group 6, this placed us against the Number 1 seeds Culford in the first match.  It was an experience that the boys will probably have to wait a very long time to repeat again, as, at previous finals, I have never seen players with such constantly high ratings and all in one team. The opposition consisted of 1.1 and 1.2 rated players – just outside the top 20 adult players in the country, with one having competed at Junior Wimbledon and another having won three British Tour Singles Events, and the other two equally impressive!

The boys knew that they would need to concentrate on getting into rallies and trying to pick up points rather than games.  With one court per ‘match,’ as 32 teams (girls and boys playing at the same venue), started with the Number 4 singles first; Fraser set the tone with a fantastic effort, focused approach and some excellent points using a variety of spins including a couple of shots during rallies that his opponent could not return. Aidan (13) was up next, making a valiant effort and again playing some constructive rallies against his tall and powerful opponent, followed by Conrad (13), quietly determined to win as many points and games as possible, again showing an excellent mix of shots and thought-out points.  Finally, Tom (15)  went on as the College Number 1 player all week, again showing a confident, focussed and determined approach with some constructive rallies and points played.  This enabled him to win the College internal competition to see who could win the most ‘points’!

The boys all played extremely well and the opposition clearly inspired them.  The Culford team should also be praised on their approach and respect shown during the match – the mark of top athletes!  They went on to beat Reeds in the final, who had won the event since 2007, meaning that we lost to the eventual winners!

Wednesday created a very unusual situation, and possibly a first at this National Event, as Aidan representing the College had to play against his brother James M representing Repton. They had lost the previous day in a shoot-out to Ellesmere College.  Having drawn lots of positives from the day before, the College boys were set to try and claim some games despite the opposition consisting of no one less than a 4.2 rating – the highest a 3.2.  Fraser was extremely unlucky as he had had numerous deuces but lost 0-6 0-6, while Aidan managed a 2-6 2-6 defeat, of which he won the games rather than his brother giving them to him. Conrad managed a 2-6 1-6 defeat, again with some extremely thoughtful play and Tom also played some excellent tennis with some hard, well placed shots which enabled him to gain 3 games in a 2-6 1-6 defeat.  Repton were very friendly and equally found the Aidan / James match entertaining, with support given to both players. J Aidan won the internal College competition of the day by 1 game!

On Thursday William stepped in as Number 4, travelling up in time for the Quiz on Wednesday and able to watch the Repton match and acclimatise. Due to the way the play-back works, our opposition was stronger on the Thursday than it had been the day before – Aylesbury Grammar not lacking in confidence with their 2.1 – 4.1 rated players.  William coming in mid-way through the week did extremely well to adjust and it acted as an excellent warm-up for his Friday singles.  Aidan and Conrad also lost 0-6 0-6, although all three were very unlucky not to pick up games in our first outdoor match of the tournament.  Tom was able to claim back his College most points or games title for the Thursday, with a 1-6 0-6 defeat in a match that provided lots of power-shots!

On Friday the College played against Queen Elizabeth’s, Cumbria, in which their ratings were a little more feasible although still considerably higher than our team in most cases:  2.2 , 7.1, 8.1 and 10.2., compared with our players being 8.1, 9.1, 9.1 and 10.1.  William opened the day with a fantastic effort in which, despite losing the first set 1-4 (short sets on the final day), he came back and won the 2nd set 4-0 (his opponent clearly put off by William's athletic skill and excellent mix of shots). Unfortunately he lost the tie-break in the 3rd – a tremendous effort and performance to be proud of!  Aidan managed to come back in the 2nd set of his match, losing 0-4 4-5 (4-7 in the tie-break), and Conrad once again played at a consistent level, showing great ability for future years, but his opposition was too strong at present, resulting in a 1-4 1-4 loss.  Tom had his work cut out once again, playing a 2.2 rating, and his opponent, although friendly, clearly meant business!  Some excellent points were played, but Tom was not able to match the power and accuracy of his opposition to convert points into games on this occasion.

Overall, I am extremely proud of the boys, who were a real credit to the College.  It was a very enjoyable week, which showed them what they can achieve in the future if they work hard. It also shows that we have excellent potential at the College – Well done!