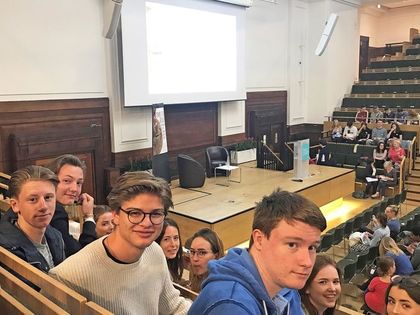 Last Tuesday A Level English Literature students attended the Forward Arts emagazine Poems of the Decade Conference in London. The event featured literature live and unplugged, with appearances from contemporary poets who, we discovered, were not necessarily dead, white or male.

Six poets read and talked about their work, providing insight into the creative processes behind poems that the students are currently studying for their A-level. Paul Farley and Sinead Morrissey had some interesting things to say about form and Tim Turnbull gave a compelling performance of poetic inscrutability. The day ended not with a whimper but with a trademark lively performance by Luke Wright, who also performed at the College's Festival of Literature in 2015. Students found this to be particularly entertaining, but also judged the whole day to be useful and inspiring. Should the gods of poetry allow it, we hope to be back next year.