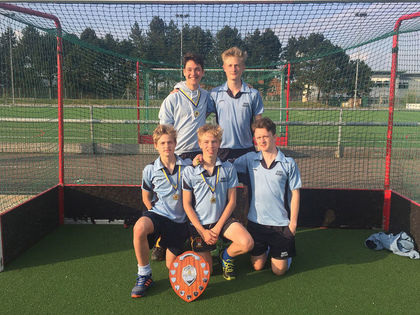 On Sunday 23rd April, Bishop’s Stortford College pupils played for the powerful Hertfordshire U15 team in the Eastern County Hockey Championships. Coach Nick Mulvaney chose just 16 players, from a squad of 2 teams, to compete in the County Finals - 5 of whom were from the College: Josh B, Ben B, Joe P, Henry M and Josh C-S.

This was the second year in a row these boys have played a part in winning the Eastern Counties Hockey Championships (Hertfordshire beat Essex in last year’s final). This year the team won 4 games and drew 2 in the tournament, which was held at Norwich Hockey Club, where Henry scored all 3 goals in the match against Essex.

As part of their preparation for the Championships, the College boys participated in a hockey tour to German National Champions, Rot Weiss-Koln, during the Easter holidays. All 5 boys acquitted themselves admirably against high quality opposition and this certainly helped contribute to their U15 County team’s success.