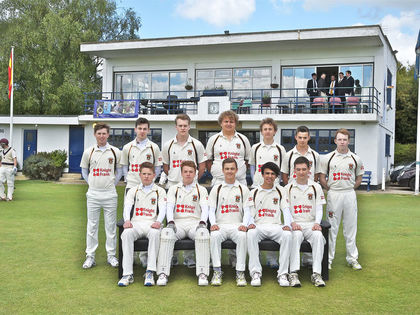 A memorable win in this prestigious fixture on what was a very special day for all involved. Bowling first, we struggled to contain a strong MCC batting line up on a beautiful pitch prepared by Mr Witherden; they scored fluently but we worked hard to gain some control in the field. Joe R (L5 SuH) picked up our first wicket with a slight change of pace to deceive the batsman. Sean B (U6 HH) picked up the other wicket and bowled well in both his spells, with Alex P (L6 RPH) producing an economical 8 overs to restrict the MCC in the middle overs of their innings. The MCC captain declared with a good score but left us plenty of time in the game to chase the runs if we could play well. 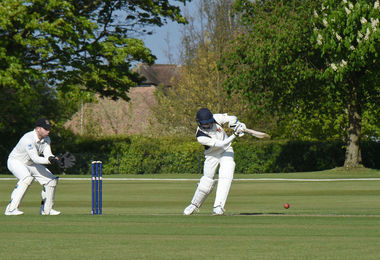 Our batters came out and were positive from the start: despite losing Elliot N (L6 SuH) early on, Kyle H (U6 SuH) and Alex P looked to dominate the bowlers and p

layed some excellent shots to get us ahead of the scoring rate required. We sadly lost both of them in consecutive balls (and both for a well-made 32); this meant we had to re-build the innings through Joe H ( 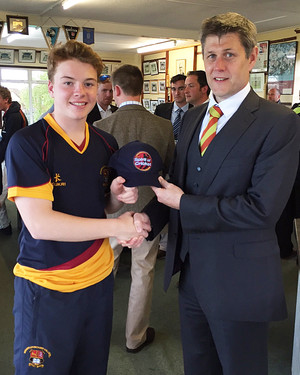 U5 RPH) and Ed C (4th Form HH). These two did just that, putting on a superb partnership of 100 runs to gain control of the match: Ed played a mature innings with many high quality shots and when he was dismissed for 32 the match was firmly in our hands. Joe produced the match-winning innings with a superb 84 from only 69 balls, with many exceptional shots, especially when he was hitting down the ground: this included an enormous six back over the sight screen off an ex-England ‘A’ team bowler. When he got out, it was left to Bradley M (L6 SuH) and Henry H (L6 CH) to finish the job and secure a wonderful win against the MCC with plenty of overs spare.

Joe was awarded the "Spirit of Cricket” cap by Andrew Mackinlay, the MCC captain, for his player of the match performance - a wonderful achievement for him. Mr Mackinlay complimented the entire 1st XI for their positive attitude throughout the match, and for the high standards they maintained with both bat and ball.

Well played and many congratulations to all the boys on this special achievement.