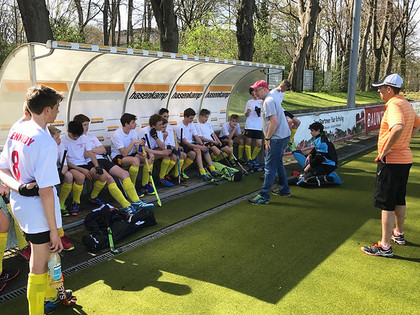 The U15/U14 boys' Hockey teams enjoyed a highly successful five day tour to Köln, Germany, at the start of the Easter holidays. The U15s are one of the College’s most successful sides, having beaten Repton to come 3rd in the National Schools’ Finals last year and losing just one school match last term. The boys needed something extra during the holidays to challenge their skills and understanding of the game and, with the unfortunate collapse of the Berlin tour with just 4 weeks to go, it was left to our old friends Rot Weiss-Köln, to rescue us and provide us with some very tough opposition.

Over the five days the boys played 5 matches against U16 opposition and one match against U14 opposition.  By the end of the tour they had won 1 game, narrowly lost 2 and competed well, but lost heavily, in 3.

The U15s found that with the slightly older and larger boys they were unable to run away from them and therefore had to construct interplays involving a series of passes and lots of sympathetic leading.  The speed of thought required to elude the wily German defenders really took our boys outside their comfort zone and put real pressure on them to think carefully about the timing of, and the complementary direction of, their leads.

Playing all our matches on water-base pitches was a nice new experience for the boys but this brought a different skill set which the players needed to get used to.  The German boys once again had the advantage here and we quickly learnt to be much more precise in our movement of the ball and in our use of 3D skills, whilst the channelling skills that we had practised in the sessions before we left for Germany, started to pay dividends in helping to nullify the rapid German attacks.  In short, over the five days the boys have had the most marvellous hockey experience and all have rapidly improved, not just in skill set, but also in terms of what they now know they are capable of achieving on a hockey pitch. 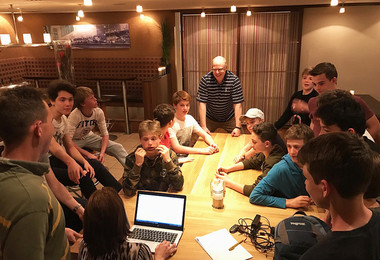 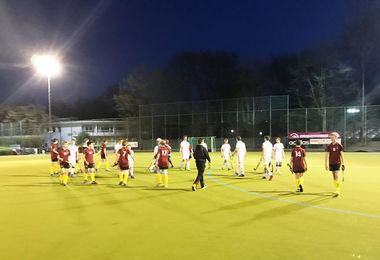 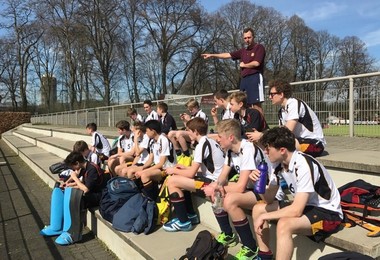 Other highlights of our tour included watching the Rot-Weiss men’s 1st XI (containing 13 German internationals) play against another club; eating pasta carbonara in the sunshine, sitting in Rot Weiss’s beer garden after the first day of the tournament; Mary’s European Quiz evening entertainment narrowly won by Damien Z’s team from Team Big Boy Bass; the 2 hours spent go-karting where Dan E, Joe A and Jamie M reached the winners' podium after a practice round, followed by full qualifying and then an 8 lap race; the fiercely contested game of swimming pool rugby won by Ben B, Josh B and Joe P; the 3D skill session with the lengths of German plastic pipes; not to mention the trip to the Gestapo museum, chocolate factory and the Olympic museum. 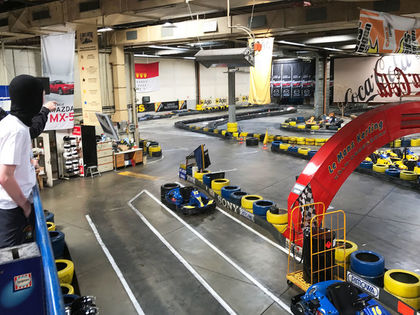 Many thanks to the parent drivers (Craig and Mary Bassingthwaighte and Luc Smink) who interacted so supportively and enthusiastically with the boys and to Matthew at Rot Weiss who arranged so much in such a short time.

Tour Awards (as voted for by the boys)

The Tour’s Most Improved Player

The Players’ Most Valuable Player