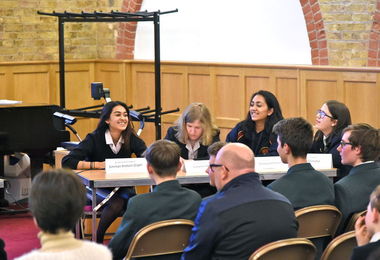 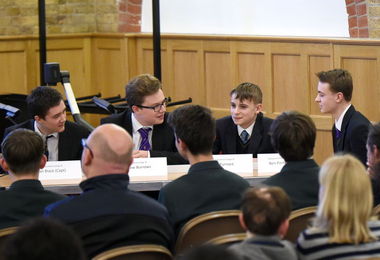 This year's Rotary Club of Bishop’s Stortford Inter-Schools Quiz took place  in the FLT at the College on the evening of Monday 6th March. Former College schoolmaster David Hopper once again took control of proceedings by acting as quizmaster for the evening. Hockerill, Leventhorpe, Birchwood, Herts and Essex, the Bishop's Stortford High School for Boys, St Mary’s and the College (x2) each entered teams into the competition where all four quarter-finals, both semi-finals and the final all took place in the same evening.

The first quarter-final saw the College A team, comprising: Sean B (captain), Matthew B, Luke F and Ben P, take on Leventhorpe first team and a rather one sided match saw the College triumph by 230 points to 60.

The College B team, comprising Simrhan K (Captain), Victoria J, Shreeya K and Elizabeth G, were up next against the Boys' High School and although this proved to be a closer contest, the High School proved stronger in the last five minutes and so booked their place in the semi-final by winning 300 points to 190.

The third quarter-final pitted St Mary’s against Hockerill Anglo-European College and it was Hockerill who proved strongest from the start, winning quite comfortably by 350 points to 130.

After a brief interval the College first team played the Boys' High School first team in the first semi-final. The College team started extremely well, opening up a 100-0 lead after only two minutes. At the half way point this lead had been maintained (200-100) and it was the College who took control in the second half of the match so that the eventual score was a comfortable High School 140, the College 340.

The second semi-final between Herts and Essex and Hockerill saw Hockerill establish an early lead and this was never really threatened as they went on to win by 320 points to 170.

The final of the competition was a 20 minute contest between the College first team and Hockerill. A couple of errors on behalf of the College meant that after five minutes Hockerill had edged in front by 120 points to 70 and after ten minutes this had been extended to 240 points to 100. Always playing catch up, an impressive third quarter meant that with five minutes to go the Hockerill’s lead had been cut back to 100 points (310-210). Hockerill, however, remained steadfast and the final score was Hockerill 420, BSC 310. This meant that Hockerill College were deservedly awarded the cup for the first time. I congratulate all eight of the College competitors, several of whom will be around to try to win the trophy back next year.