Prep School Pupils are Magistrates for the Day 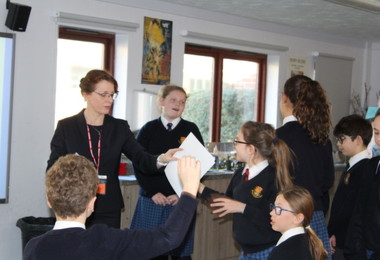 Prep School pupils enjoyed learning all about the workings of a magistrate's court on Friday 24th February, when four local magistrates visited Form 2 pupils, as part of their PSHEE programme. The magistrates spoke to pupils about the legal process before going on to run a mock court complete with a defendant in the dock, prosecution and defence lawyers and witnesses. Once the guilty verdict had been reached (the defendant had clearly stolen the gold bracelet!) pupils learnt about sentencing procedures. Pupils were particularly interested to discover that the majority of cases are tried in magistrates’ courts and that magistrates are ordinary members of the public who voluntarily give up their time.

Mehran and Rob in 2VL wrote a thank you letter to the magistrates, to express just how much the pupils all gained from their visit:

Thank you for giving up your time to come to Bishop’s Stortford College. We thoroughly enjoyed your talk to Form 2 and learnt a lot of new things. For example that magistrates work in teams of three, that they don’t get paid and that they are all members of the public. We were also interested to find out that there is a book which helps you to work out how to sentence people who are found guilty. We enjoyed the mock court activity because it was interactive and took us step-by-step through how trials work. It was also more exciting to learn in this way rather than our teachers just telling us the facts!

Thank you once again for visiting our school.