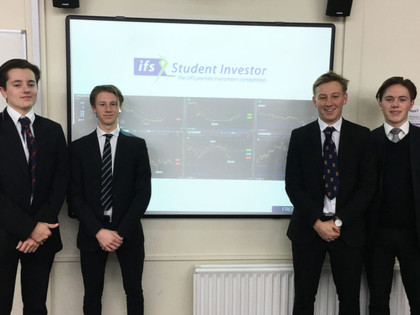 Congratulations to the Sixth Form pupils whose team, Strantent Oakmont, has qualified for the semi- finals of the Student Investor Challenge.  The team, comprising Will L, Henry H, Ralph G and Tom W,  qualified as one of the top 500 out of 6,414 teams nationally.

The semi-final challenge will run from 20th February 2017 until 17th March 2017, and will involve 500 teams from UK schools competing against each other online.  For each week of the semi-finals, teams will need to correctly predict the closing price of certain assets by the end of trading on that Friday. Points will be awarded each week according to how accurately the closing price has been predicted and how long the prediction has been held. A team's overall score at the end of the semi-finals is the sum of their best three weeks' performance out of four (i.e. their worst performing week is discounted).

This semi-final competition will test the boys' knowledge and academic ability to the full.  We wish them all the luck trying to qualify for the finals, and a chance at the first prize trip to New York! If you wish to find out more about the challenge, please click here.