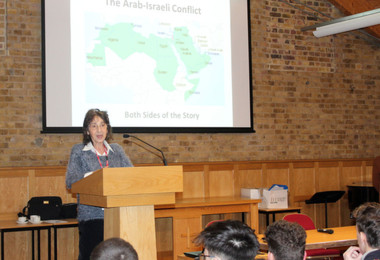 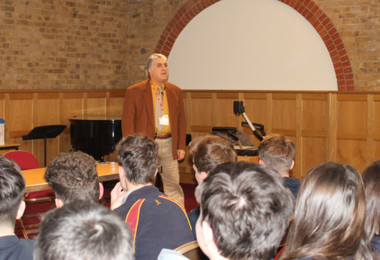 On Thursday 26th January, Upper 5th pupils enjoyed a fascinating and thought-provoking talk on the conflict in the Middle East by two speakers from Middle East Education: Ruth Camay, who is Jewish, and Sami Hussein, who was born in Iraq and grew up in the Middle East.  Both speakers have an in-depth knowledge of the Arab Israeli conflict, having specialised in the Middle East for many years.  Despite representing opposing camps, Ruth Camay stressed that rather than being adversaries, they were close friends who sought to understand both sides of the conflict.

This provided the foundation of the talk - to encourage pupils to try to understand both sides of the story.  Ruth Camay believes that it is only by listening to both sides of a conflict that real understanding can be achieved.  In her talk to the pupils, she encouraged them to question information given to them rather than accept it as facts and to seek to understand what is really happening such as by checking primary sources directly.

Sami Hussein told the pupils about his own upbringing in Jordan and other Middle Eastern countries and shared his unique depth and understanding of the conflict and of the mindsets of those who contribute to it.

At the end of the talk, the pupils asked some really thoughtful, intelligent and sensible questions.