Ben, Alice and Jessica Invited to Houses of Parliament 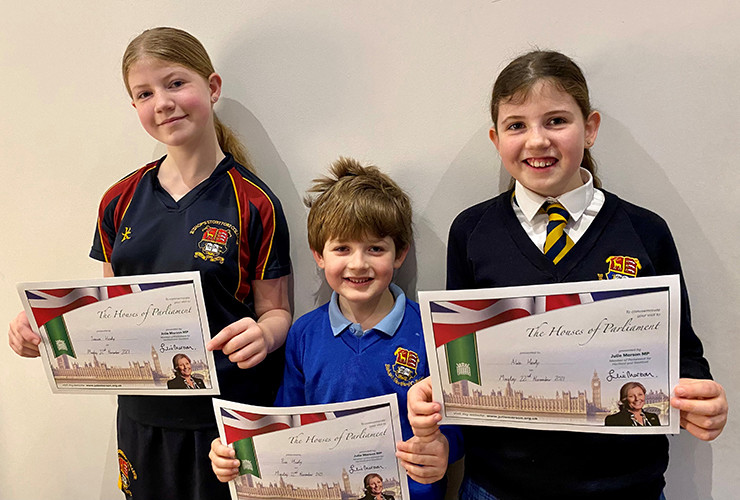 On Monday 22nd November, Ben H from the Pre-Prep and his sisters, Alice and Jessica in the Prep School, were invited to visit the Houses of Parliament by local MP, Julie Marson.

The invite was sent to Ben, Alice and Jessica on behalf of the fundraising they did last year on behald of the Bishop's Stortford Food Bank. Ben, who is registered as blind, completed an incredible sponsored climb whilst he was in Year 1, cheered on by his sisters, who all managed to raise an astounding £3,500 for the Food Bank.

Find out below what Ben, Alice and Jessica did during their visit to the Houses of Parliament: 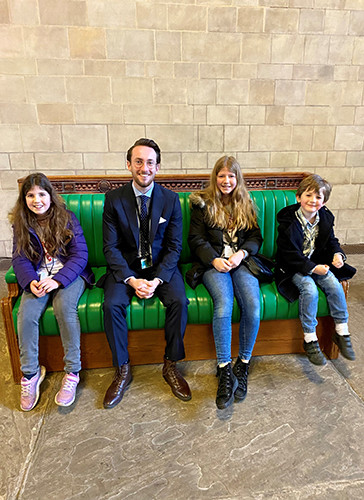 "After getting through lots of security, we toured the Houses of Parliament and learned about democracy in the UK. It was amazing and very interesting to see all the grand halls and chambers (which looked a lot like Hogwarts), learn about politics, art and history, and walk where famous politicians and Prime Ministers have been.

There were many sculptures and paintings everywhere; the biggest were two giant murals that showed pain and suffering at the famous battles of Trafalgar and Waterloo. This was to remind politicians of the horrors of war for soldiers, and to make decisions responsibly for all.

We were allowed inside the House of Commons, which was coloured coded in green, and also the House of Lords, which had a lot of real gold decoration and was colour coded in red. We learnt how laws are proposed, debated and passed by MP’s (Members of Parliament). Also, it is forbidden for the Queen to enter the Houses of Parliament, as a sign of respect and acknowledgement that Parliament decide the laws for the country, not the monarchy as it once used to be. Whenever the Queen does visit the Houses of Parliament for her annual speech, she is only allowed in certain rooms with a blue carpet. Also her servants still have to check the cellars first as a tradition, to make sure there are no barrels of gunpowder down there!

We learnt about the Suffragettes and their protests for women to be able to vote, which was finally allowed in 1928. This struggle was symbolised by a stunning artwork called ‘New Dawn’ by Mary Branson, which showed many different coloured lights. These lights represented the real ever-changing tides of the River Thames, but also symbolised all the different groups in society who were once denied the right to vote. As the lights glow up with the changing tides, it represents being seen and heard, positive movement and change for all.

We felt very honoured to visit such a magnificent and important place, and feel very fortunate to live in a country where everyone can vote, and everyone’s voice can be heard."