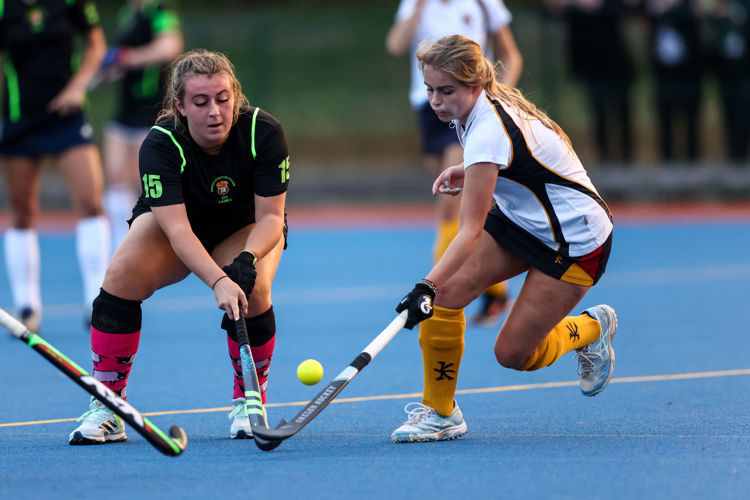 The 1st XI hosted the Old Stortfordians (OS) on the night of Friday 10th September in the first competitive hockey fixture at the school since March 2020! It was the OS who triumphed, regaining the trophy they last won back in 2016.

On a balmy evening which was well-attended by spectators, both sides played with passion and intensity. The College side belied their youth and inexperience at this level by starting the game strongly. They passed the ball through the lines with confidence and pace and were unlucky not to take the lead when Issy S’s shot went narrowly wide. As the College attacked, they were vulnerable to the counter attack and it was from one of these attacks that the OS took the lead through Abbie Barrett (YH, 09-14, Staff, 17-19). They doubled their lead just before half time after a goal mouth scramble had seen College goalkeeper, Ibby W, make a number of fine saves only to be beaten on the 4th rebound!

The second half saw the OS side up their intensity and whilst the College’s defence stood firm, they were unable to prevent the OS from adding to their lead. Although the scoreline was in the OS’s favour, the College team showed great promise with Vibha M, Sophie M and Issy S all having strong games. Imogen B was voted the College’s player of the match after a tireless performance in midfield and Harriet Marsh (YH, 01-06) took the accolade for the OS. Ibby W was also mentioned after a fine display in goal for the College. Mads Newitt (TH,YH, 16-20), who captained the OS, collected the trophy from Development Director Britt Ellice.

Many thanks to Jennifer Law and her team for organising such a brilliant evening and to Steve Salter and his Chartwells catering team for providing amazing food and refreshments.

We are looking forward to 2022 already!

Director of Sport and Head of Girls' Hockey