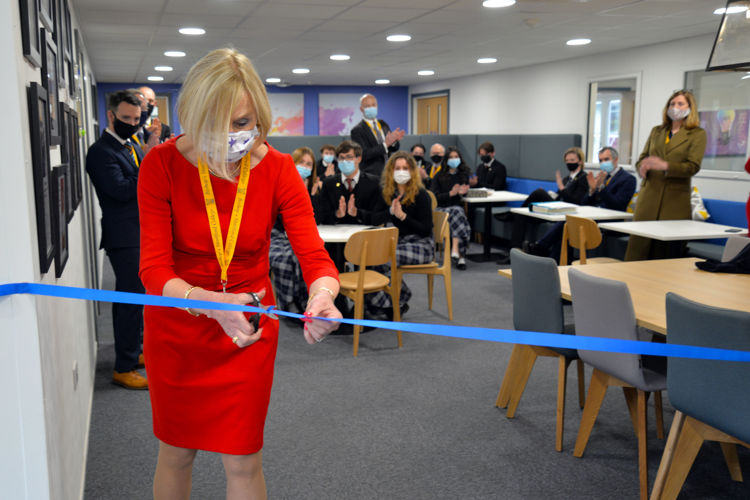 A new Sixth Form Learning Centre was officially opened on Wednesday 28th April by Pauline Mullender, Governor and Chair of the Education Committee at the College.

The building, which was the former home to several individual staff and department offices, was transformed over the Easter holidays by school interior design and installation specialists, TaskSpace. The Learning Centre, the first of its kind at the College, provides a unique and dedicated space for Sixth Form students to work collectively or independently, hold team meetings and have 1:1 meetings with staff. 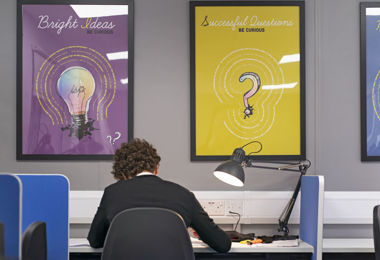 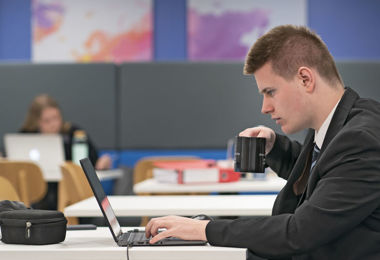 Complete with quiet study areas, a conference room, a well-equipped kitchenette and gallery of notable College alumni, the Sixth Form Learning Centre encompasses an environment which prepares students for life beyond the College. Head of Sixth Form, Katie Banks, commented, “The Sixth Form Learning Centre is designed to mimic a modern undergraduate study space or work environment. It provides an opportunity for students to collaborate on assignments or to hunker down in a quiet, calm place to get on with their A Level work and independent study. It is already being well used as the Upper Sixth prepare for their assessments.”

Watch the video below to be taken on a tour of the Learning Centre, made by two of our Lower Sixth students, Charlie H and Thomas N.

Students can use the Sixth Form Learning Centre throughout the school day during their study periods, as well as after school.

Here's what some of our current Upper Sixth had to say about the Learning Centre:

"By having a [...] work space where all Houses can mix in their free periods and over breaks, my friends and I have really enjoyed the new SLC, especially during our TAG assessments. The centre offers a range of work rooms, depending on the environment you prefer, from a quiet separated desk room, to the conference room for meetings or group projects. The Sixth Form students in years to come will profit great amounts from it, as we are now!"

“The Sixth Form Centre has transformed the way I work at school, I have particularly enjoyed doing group revision in the board room - it has enabled me and many others to get our heads down to revise and encourage each other along just when needed! The response from the year group has been extremely positive and it certainly has helped my disciple and focus approaching the current exams.”

"So far, I have found the SLC my favourite place to spend my time between lessons. Tastefully decorated, it is a warm and welcoming place to revise, or even catch up with friends from other Houses over a cup of tea. There are plenty of comfortable spaces for different purposes [...]. The quiet areas are also great for quiet study, and the conference rooms for group work. One of my favourite features of the SLC is the addition of art created by students from the school. It is wonderful to see the creativity of various students shown for others to see, as well as making the space more colourful and personalised. Overall, I feel very grateful and privileged to have access to such a wonderful space during my school day."

"I think that the addition of the SLC has been such a high point for our year especially as we’re doing our exams because it’s provided such a nice environment to be able to socialise and also get work done. Especially with Covid, it’s been harder to see different people because of House restrictions etc. so it’s really great to have a space with a group environment!"

"I think the best thing about the new Sixth Form Learning Centre would be its convenience. The fact that it is open early in the morning has allowed me to get some work/revision done in times where I would usually be sitting in House being unproductive."