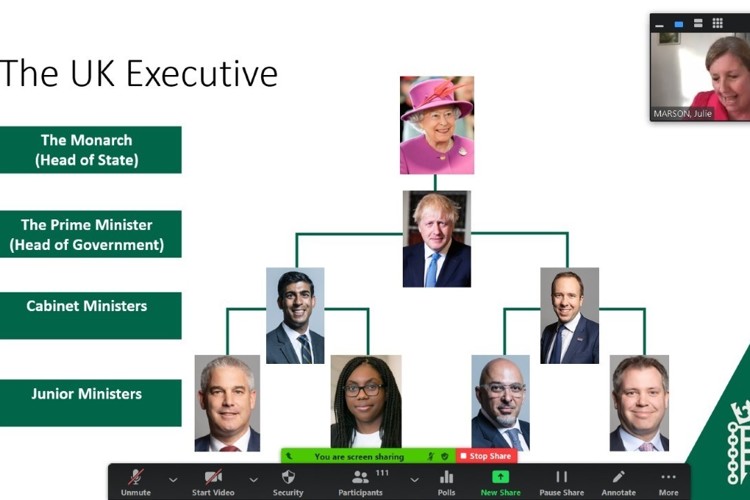 On Friday 5th February, Lower and Upper Sixth Politics students took part in a Zoom webinar, alongside 6 other schools within the constituency, with Hertford and Bishop’s Stortford MP, Julie Marson.

Julie's lecture explained the relationship between the legislature and the executive, which was excellent revision for the students. She also spoke about her personal role as an MP and how she felt the Covid-19 restrictions had affected the role of Parliament. Students asked a series of thoughtful and intriguing questions which Julie answered honestly, showing a real sense of empathy with them. 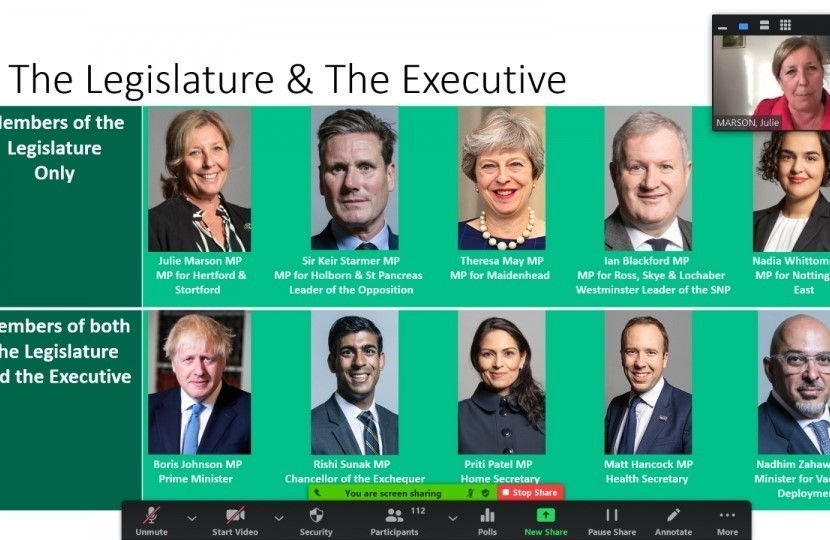 Although Julie had to leave the Zoom call to attend another meeting, her Parliamentary Assistant, Nathan Weavers, remained for a further half and hour and spoke about his role. Nathan explained how he had progressed from studying Politics at university to working as a Parliamentary Assistant, firstly for Robert Halfon MP for Harlow, and then for Julie. The webinar was an excellent opportunity for the students and highlighted a positive that has come from lockdown; the ability for students to engage more directly in the political process.

“What I found particularly interesting was Julie’s analysis of how Covid-19 has affected the running of Parliament; telling us how her days have on one level been more productive and how it is now easier for MPs to defy the whip as it doesn’t involve physically dividing to vote. Julie also did not shy away from the tough questions, which I thought was great. She was asked about her vote against free school meals during the holidays and her objection to the opposition motion regarding flammable cladding; explaining that the government had other bills in progress that they believed better addressed the issues. Julie also looked beyond the UK, raising concerns about how the current Covid-19 curbs on civil liberties may possibly end up becoming permanent in other countries such as Hungary, which overall made the talk not only a great opportunity to revise some UK politics, but a nuanced and insightful analysis of today’s political climate from someone on the inside." - Freddie C, Upper Sixth

"Julie Marson's brilliant talk to us on Friday was extremely insightful; not only did she give us an inside view into her career progression to become an MP, but she also told us how Covid-19 has affected the work of the House of Commons. She believes that in this, a period of online debate for the lower house, it has lost the element of involvement it had previously. Although some changes have been for the better, such as those on parental leave being able to vote for the first time, it has given her and other MPs a greater appreciation of the most vital parts of the live debate process. Her succinct and clear outline of the nature of the commons has been great revision for the almost 130 students in attendance. Overall, the experience was educational and extremely interesting. I am hoping to see her or others with similar positions again to gain more from their unique perspectives." - Lydia H, Lower Sixth