5-year-old Climbs for the Community

Pre-Prep pupil, Ben H, who is registered legally blind, has raised over £1,000 for local charities by embarking upon a sponsored climb.

5-year-old Ben was diagnosed with Nance-Horan Syndrome, an extremely rare genetic disease, at just 2 weeks old. As a blue badge holder and formally registered as severely visually impaired in both eyes, Ben has undergone multiple eye operations in his lifetime at Addenbrookes Hospital, Cambridge. Ben and his parents are incredibly grateful for all the medical care they have received from many specialists over the last 5 years at not only Addenbrooke’s but Moorfields, Hertfordshire, Lister and Great Ormond Street Hospitals.

Ben wears special contact lenses to give him a focus range of approximately 70cm; without them he can only see light. Having received specialist care and support throughout his lifetime, Ben’s older sisters, 8 year-old Alice and 10 year-old Jessica, are dedicated to helping their brother and have supported him every step of the way.

At the start of each new academic year, Pre-Prep pupils were given the opportunity to choose a charity to support for the year as part of their School Voice initiative. Pupils were keen to show their support for the local community, especially the Bishop’s Stortford Food Bank and think of ways in which they could help. 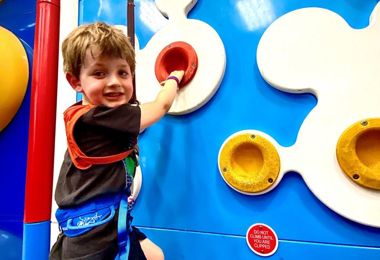 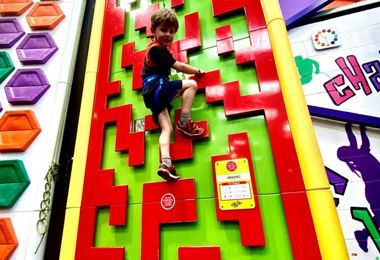 Inspired by his sisters, Ben decided to take on a climbing challenge in aid of the Bishop’s Stortford Food Bank to kickstart the Pre-Prep fundraising. Over the weekend Ben visited Clip’n’Climb, Cambridge, and completed his sponsored climb with his sisters; the first climb he has ever done. Encouraged by his sisters and family, Ben climbed to the top of 10 different walls a total of 30 times. Ben’s visual impairment means that a lot of this was done through touch alone.

To date Ben has raised over £2,500 with the support of his family, neighbours and friends. Miss Callow, Head of Pre-Prep, commented, “Ben has been an inspiration for us this term in completing the climbing challenge and has made a significant start towards our fundraising for this year. He responded so quickly to the plight of others that we had been talking about, and gave himself a real challenge to show his support and raise money. We are extremely proud of his achievements and look forward to an important year of raising money to support our chosen charities.”

On Monday 12th October, Ben received a House of Commons letter from Hertford and Bishop's Stortford MP, Julie Marson. As well as congratulating Ben for his incredible efforts, which Mrs Marson described as being "nothing short of heroic", the letter invited Ben and his sisters for a tour of the Houses of Parliament once it is safe to do so. 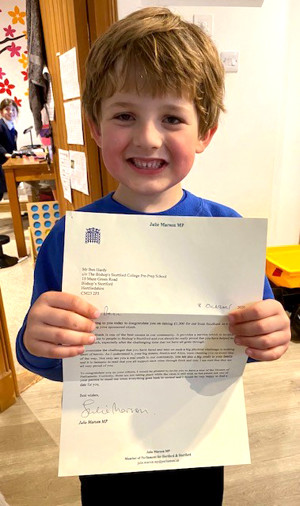 For anyone wishing to donate to Ben’s fundraising efforts, the link to his JustGiving page can be found here, https://www.justgiving.com/fundraising/liz-hardy3. More can be read about Ben's inspiring story on the Bishop's Stortford Independent website.