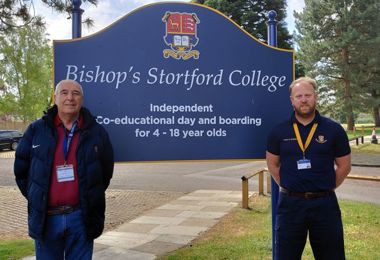 Earlier this week, Head Groundsman, Adam Smith, was delighted to welcome Michael Hunt to the College. Before he retired in 2018, Mr Hunt had been Head Groundsman at Lords, the home of the MCC, where he tended their hallowed turf for 49 years. 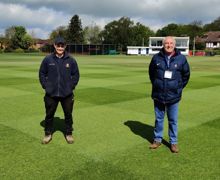 generations of Witherden who had been Head Groundsman at the College). Ben and Dave were excited to discuss all things turf with such a renowned expert and found his visit inspiring.

Adam Smith, who joined the College team last month commented, "It was such an honour to welcome Mick to the Doggart and show him our cricket facilities. There's not much he doesn't know about grass and groundsmanship. The icing on the cake though, was following a thorough inspection of the playing surfaces, Mick  declared our square in excellent condition and good enough to host county matches. It's a real tribute to all the work that's gone into it over the years."

After taking core samples of the square and the outfield, some areas were identified that require some improvement and the grounds team are now putting together an action plan. Everyone is looking forward to seeing cricket played at the Doggart once more, very soon.