Pupils' Afternoon Tea at Women in IT Awards 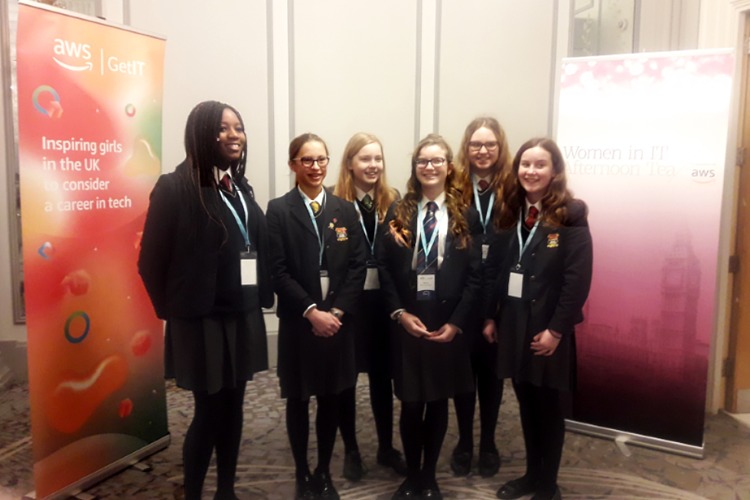 On Wednesday 29th January six Fourth Form girls attended the 'Women in IT Afternoon Tea' event in association with Amazon Web Services (AWS). Held at the Grosvenor House Hotel in London, the event gave the girls the opportunity to meet fifteen inspirational women from the tech industry and, through an information networking session, to ask questions and discuss possible futures in tech. Each of the women was a nominee at the Women in IT Awards, to be held later that night at the hotel. In fact, two of the women, Josie Young from public sector partner Methods and Anna Zappone from Google went on to win their category! The girls did a fantastic job of engaging with the nominees, asking lots of questions and gaining lots of insight into possible career paths.

The Women in IT Awards aims to showcase the achievements and innovation of women in technology and identify new role models in a sector where female representation stands at only 19%. During her closing speech at the afternoon tea, Sonia Ouarti, Head of Strategic Engagements for AWS EMEA, spoke passionately about how more women are needed in the tech industry and how she had hoped that the pupils in the room had been encouraged to consider a career in IT. Whilst the College girls might not all pursue a career in technology, it was an amazing opportunity for them to be exposed to such a range of intelligent, successful and inspirational women.

After meeting the CEO of OpenUK, Amy, one of the Connect Hearo team members, was asked to write a blog post describing her experience of winning the AWS Get IT Competition last year. You can read Amy's article here.