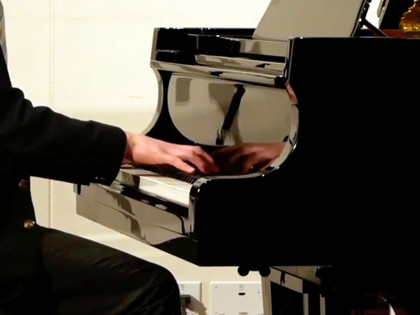 Senior School musicians showed off their talents in the annual Pianists' Concert in the Memorial Hall on Monday 30th January. The piano being one of the most versatile and popular instruments, the College dedicates a recital exclusively to this instrument. All the pupils who took part are already accomplished players and the majority of the pieces performed were of grade 8 standard or even diploma level.

The repertoire in the concert was dominated by several works by Beethoven, in celebration of the 250th anniversary of his birth. Harry N began the recital with his accomplished performance of 32 Variations in C minor by Beethoven and both Annie and Penny Z followed with two other pieces by the German master, playing the first movements of the Sonatas Op. 13 and Op. 10 No. 2 respectively.  Edward S and Justin M both presented works from the romantic era and Justin’s astonishing performance of The Lark, a famous piano transcription by Mily Balakirev, can be heard here:

Eleanor S made her debut as a pianist at the College with her delightful interpretation of the Scarlatti Sonata in D major K. 214 and Anqi H chose a lovely Chinese transcription for piano. The penultimate work in the programme was Big Band Sound by Nikolai Kapustin, played by Joseph A with a great sense of swing and virtuosity.  To conclude the recital Harry, Eleanor, Justin and Anqi returned to the stage for a special performance of Libertango by Astor Piazzolla, arranged for two pianos and eight hands.

For a video with highlights of the concert click on the link bellow:

Many congratulations to all the players involved in this wonderful evening of piano music!