U14 Hockey Boys Through to Regional Prelim Finals 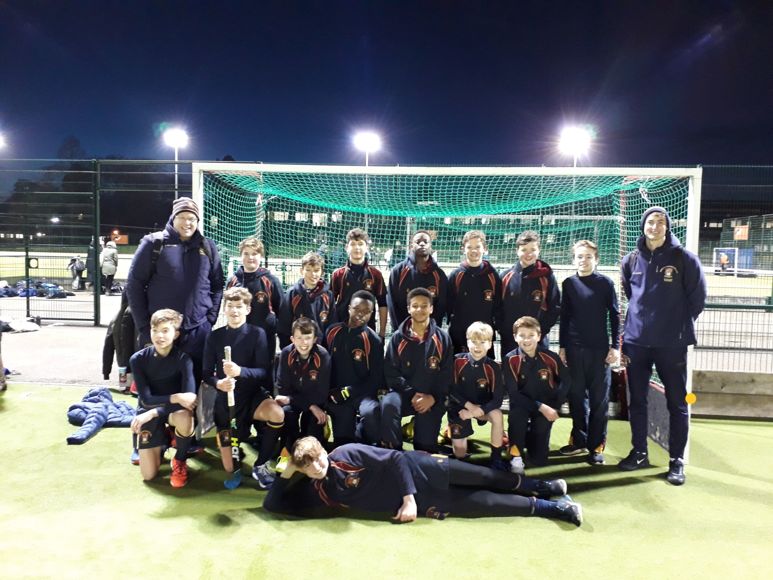 The U14 Boys' Hockey team are through to the East Regional Finals!  Here's the tournament report from Mr Brooks.

The boys had a good day’s hockey on Tuesday 28th January at the County Championship where they finished 3rd out of 9 teams and thus progress to the regionals.

The day started well against Hockerill with a good 4-0 win in which the boys controlled the game well through Y Kadri, S Holleyman and D I-O.  With H Bannister, J Pickup and J Anders distributing well at the back it helped move the ball rapidly between the lines allowing E Smith, Cooper, Wilde and Anders  to score.  The game against Merchant Taylor's was a much closer affair against a fast and skilful team.  In the end it could have gone either way, but their 1-0 win and subsequent victory overall was deserved.

In our final game against Aldenham we were guilty of missing several chances but good performances from F Hickey in goal, H Brooks, J Baker, J Smith, J Searle, R Adebajo helped us keep control of the ball as well as keeping a clean sheet.

In the semi finals we felt we were a bit unlucky not to score and ended up losing to a side that seemed to only have one shot on goal.  Happily the boys found out that the bronze medal winners would also go to the regionals and to add a bit of spice they were playing Hitchin, whom they had lost to 2 weeks earlier.  In this game we were the deserved winners and again excellent work from Kadri, Hickey, I-O, Cooper and Holleyman ensured that we not only scored two good goals but were able to prevent them developing attacks through the middle.

In the end we were pleased with our 3rd place finish as we know just how far we have come in the past few weeks (as shown by the 3 goal swing against Hitchin (0-2 to 2-1)) and also how much we can still improve.

Many thanks to Mr Bolton for his sage advice to the boys and me, for his umpiring and, as ever, his sense of humour.